Charles Ritchel and the Dirigible Though early aeronauts considered the transportation possibilities of ballooning, the balloon was essentially an uncontrollable craft, with a trajectory as unpredictable as the breeze on which it traveled. For more practical lighter-than-air transport, aeronauts turned to dirigibles, inflatable airships that could be flown along a desired course by means of a propulsion system. While it turned out that dirigibles, too, had their limitations, this next step in the evolution of manned flight made a serious contribution to the science of aeronautics, attracting the attention of both government officials and enterprising businessmen. In March of 1878, Connecticut inventor Charles F. Ritchel of Bridgeport obtained a patent for a dirigible of his own unique design. The Ritchel Flying Machine, as it was called, consisted of a cylindrical gas bag 12 feet in diameter and 24 feet in length made of black silk. It also featured a metal frame made of brass tubing, which hung below the gas container and provided seating for the pilot. Once aloft, the pilot propelled the gas-filled airship forward by turning a hand-crank that spun the ship’s rotating propeller. The pilot could then steer his course using foot pedals that allowed him to turn a brass rudder at the front of the air ship.

Ritchel first exhibited his dirigible in Philadelphia, where he made several flights inside one of the large buildings that had been part of the Centennial Exhibition held in that city in 1876. On June 12, 1878, Ritchel brought his airship to Hartford, where a lightweight pilot named Mark Quinlan operated the hand-powered aircraft. Before a crowd of amazed spectators who had each paid 15¢ admission, Quinlan took off from a ball field behind Colt Armory. He sailed over the armory, turned out over the Connecticut River and then returned to the ball field, where he landed safely and shook Ritchel’s hand after what had been the first controlled flight of a dirigible in the US.

Ritchel later built and sold five of his patented flying machines, all the while envisioning a bigger, long-distance version of his dirigible that would be mechanically powered by an 11-man hand-cranking crew. That machine never materialized, and except for a cover article about his historic Hartford flight that appeared in Harper’s Weekly later that summer, Ritchel’s inventiveness made no lasting contribution to the science of dirigibles.

It would take World War I and the involvement of the federal government to further that science and to provide Connecticut with its first true aircraft industry. In March 1914, a group of Connecticut businessmen partnered with Thomas S. Baldwin, a pioneer in the building of lighter-than-air craft, and formed the Connecticut Aircraft Company of New Haven, the first company in the US devoted exclusively to the construction of balloons and dirigibles. 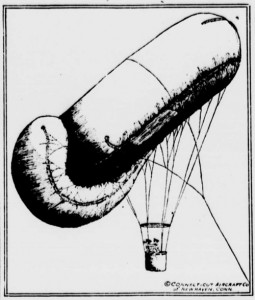 The following year the company received a contract to build a dirigible for the United States Navy at a cost of $50,000. The airship was made of two-ply rubber and measured 175 feet long by 65 feet high. Powered by a 140-horsepower gasoline engine, the ship was able to keep a crew of seven airmen and a telegraph operator aloft for several hours while traveling at speeds of up to 30 miles per hour.

In March 1917, Congress appropriated an additional $650,000 for a fleet of 16 smaller dirigibles, similar in design to the blimps then being used by the British Navy. While the bulk of the contract went to the Goodyear Tire & Rubber Company in Akron, Ohio, other contractors were also involved, including the Connecticut Aircraft Company, which built two of the blimps. In May the dirigibles underwent a successful test flight of 400 miles, journeying from Chicago, Illinois, to Akron, Ohio. That summer the fleet was put into active service guarding the country’s Atlantic coastline. The Connecticut Aircraft Company also built about 100 observation and supply balloons for the United States Army during the war and pioneered the use of the inflatable life raft.

After World War I, however, the company was unable to find new peacetime customers. In 1921, it was taken over by the Aircraft Construction Transportation Corporation, a Delaware company that hoped to build and operate a line of large, Zeppelin-like airships to make commercial flights between New York and Chicago. The company’s ambitious plan never left the drawing boards, and by March 1926 the parent corporation of the Connecticut Aircraft Company had gone out of business, putting an end to Connecticut’s first entry into the aviation industry.