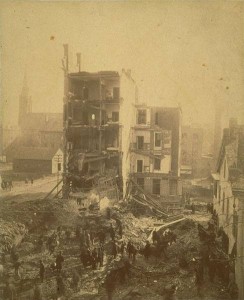 In the pre-dawn hours of February 18, 1889, the Park Central Hotel in Hartford was ripped apart by a steam boiler explosion. The hotel was at full occupancy. Twenty-two people lost their lives, and many more were severely injured.

Located at 54 High Street, the 15-year-old hotel, 5 stories high, initially measured 125 feet long and 40 feet wide and contained 40 rooms. An annex of 24 rooms for employees and guests’ servants was added several years before the explosion. The structure suffered from being built on shifting soil, and although the boiler explosion was to blame for the catastrophe, Hartford citizens, insurance company presidents, and politicians arose in common voice to demand stricter building inspection.