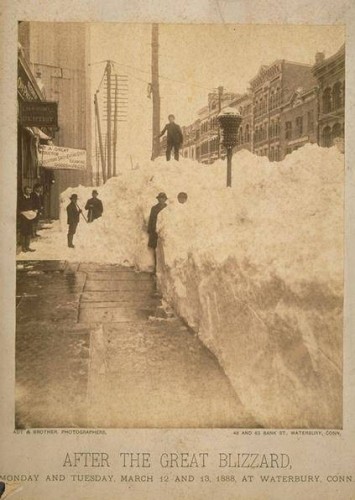 On Sunday, March 11, 1888, a blizzard came unexpectedly to the northeastern United States. A cloudy and rainy day toward the end of winter took a turn for the worse when the rain suddenly changed to hail, sleet, and snow. Heavy snows, bitter cold, and high winds stretched from Washington, DC, to the Canadian border in a storm that lasted three days. Connecticut received between 20 and 50 inches in various parts of the state, with snow drifts measuring 12 feet and higher. (New Haven, for example, recorded drifts measuring 40 feet.) More than 400 people across the East Coast died in the storm, and the total storm damage was estimated at $20 million.

While the storm caught people by surprise, they made the best of it. Humor and good nature often prevailed as the state dug its way out. People escaped snow-imposed imprisonment by crawling out of second-story windows and climbing down ladders; signs were placed strategically on snowbanks and snowdrifts offering them “for rent” and giving warnings to keep off the grass. When the railroad system screeched to a halt, stranded passengers made the best of their situations by singing and watching performances by fellow passengers. A group of 53 stranded in Vernon even renamed the depot the “Vernon Hotel.”

The Hurricane of 1938 Rocks Connecticut
Eighty-Five Hundred Souls: the 1918-1919 Flu Epidemic in Connecticut
The Steamboat New England: “The shock was dreadful” – Today in History: October 8
Misread Signal Leads to Deadly South Norwalk Train Wreck – Who Knew?
Almost a Tragedy: The Collapse of the Hartford Civic Center
Greenwich Emergency Responders: On the Move Overtime
Video – When Disaster Struck: The Flood of 1936, Part I
The Day Four Trains Collided in East Thompson
The Tariffville Disaster – Today in History: January 15
Hartford Circus Fire: “The Tent’s on Fire!” – Who Knew?