A Beautiful and Goodly Tree: The Rise and Fall of the American Elm When Thomas Hooker and his party reached Hartford in 1636, they would have found majestic elm trees growing in the meadows along the Connecticut River. The American elm is native to eastern North America and grows naturally in flood plains and other wet areas. By the early 1900s, elms were being widely planted throughout the state as shade trees and to line village and city streets. In the early 1830s, when John Warner Barber documented the appearance of every town in Connecticut for his book, Connecticut Historical Collections, mature elms were already prominent features in many towns. Elms can be recognized in Barber’s drawings by their distinctive umbrella shape—and also because the artist carefully labeled the individual trees in his preliminary drawings. Elms are noted in Canterbury, Cheshire, Ellington, Fairfield, Guilford, Norfolk, Sharon, Somers, Southbury, Windsor, and appear in other towns, most notably in several views of New Haven. 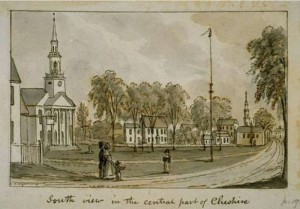 Wethersfield Elm a Giant Among Its Peers

New Haven became known as the Elm City, because of the many elm trees that lined its streets and town green, creating leafy canopies of shade. Almost every town of any size has an Elm Street, named for the popular trees. Colchester, Manchester, and Winchester all have their Elm Streets; so do New Canaan, New London, and New Milford. Norwich boasts an Elm Avenue. The trees adapted well to the compacted soils—and later pavements—of these towns and not only survived but grew and thrived. Photographs from the early 1900s show many of the trees planted in the 1700s and early 1800s grown to immense size. The Wethersfield Elm, planted in 1758, was famous as the largest elm tree in America, over 30 feet in circumference and 100 feet high. It was sometimes described as “the most magnificent tree east of the Rockies.”

Connecticut’s stately elms began to die in the 1930s. A fungal infestation, originating in the Orient, was first identified in the Netherlands and became known as Dutch Elm disease. Spread by bark beetles, it ravaged the closely planted elms that lined Connecticut streets. Additional elms fell as the Hurricane of 1938 swept through the State. The majestic Wethersfield Elm succumbed to Dutch Elm disease in 1953. Isolated trees continue to survive, including the “High Street Elm” in Hartford, which is clearly visible to motorists on Route I-84, but they remain vulnerable. Recent efforts to treat the endangered trees with herbicides and to develop disease-resistant strains offer hope that these beautiful and goodly trees will remain a part of the Connecticut landscape in years to come.

Heart Pump out of an Erector Set – Who Knew?
From Aprons to Lab Coats: The Art and Science of Home Economics
William Pinney Does It All for Ellington
The Innumerable Accolades Afforded Dr. William H. Welch
Richard Lee’s Urban Renewal in New Haven
A Good Spot and a Healthy Place: A Short History of Charles Island
From Bombs to Bras: World War I Conservation Measures Transform the Lives of Women
Video: No Booze for You – Who Knew?
Josiah Willard Gibbs’s Impact on Modern Science
The Pie Man from Georgetown and the Connecticut ~ Copperthite Pie Company