Largest Earthquake in Connecticut – Today in History: May 16 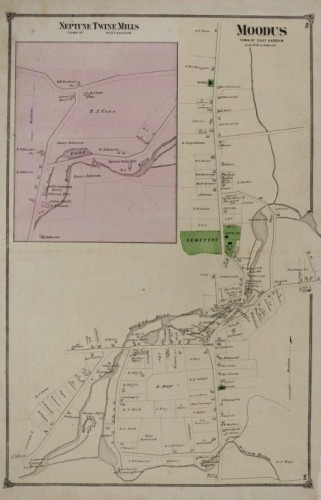 Moodus, Town of East Haddam
- County Atlas of Middlesex, from actual surveys by and under the direction of F.W. Beers Moodus, Town of East Haddam
– County Atlas of Middlesex, from actual surveys by and under the direction of F.W. Beers

On May 16, 1791, the largest earthquake to shake Connecticut took place in Moodus. Called “Machimoodus,” meaning the place of noises by Native Americans, Moodus and the area around East Haddam has long been known for earthquakes. The first reported earthquake of that day struck with two heavy shocks in quick succession and a fissure measuring several meters long formed in the ground. Shortly after, 30 lighter shocks occurred, and more than 100 continued throughout the night. The earthquake knocked down stone walls and chimneys and caused other damage to homes and property. It was reported that the shocks were felt as far away as New York City and Boston. Today, Moodus is still a source for earthquakes. In March 2011 an earthquake measuring 1.3 on the Richter scale shook the ground, and what geologists referred to as a “swarm” of small earthquakes rocked the area in January of 2015.