The Litchfield County town of Sharon is located in Connecticut’s northwestern corner and its western border abuts New York State. The General Assembly incorporated the town in 1739 and named it after the Plain of Sharon, a fertile region mentioned in the Bible. Iron manufacture sustained Sharon, and in the early 1800s town resident Asahel Hotchkiss produced home and farm goods, including rakes, buckles, and currycombs, from locally mined ore. During the Civil War, the town made munitions and invented the Hotchkiss explosive shell. Today, Sharon is a quiet bedroom community where iron stacks from the days when industry ruled the area can still be seen. 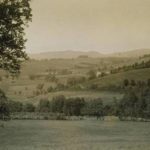 Turnpikes and Transportation in Sharon

The town of Sharon, like many early communities in the... …[more]

Town Patents the Lattice Truss Bridge – Today in History: January 28
Hidden Nearby: Two Monuments to Sportsmen at Housatonic Meadows State Park
Video: The Story of the Salisbury Iron District
Semi-Pro Baseball in Sharon – Who Knew?
A Beautiful and Goodly Tree: The Rise and Fall of the American Elm
Over Time: Sharon’s Historical Population
The Rise of the “Second Home” Community in Sharon – Who Knew?
Turnpikes and Transportation in Sharon
More about Sharon