More than 5,500 Connecticut soldiers died in the Civil War—about 10% of those who went off to war—and they left behind countless family members and friends. An additional 50,000 Connecticut veterans survived the war but did not forget its horrors or victims.  In the decades following the 1860s, communities remembered the fallen through memorial events and monument dedications, and one of Connecticut’s most prominent Civil War veterans, General Joseph R. Hawley, took a leading role in fostering the war’s remembrance.

After 1865, Civil War veterans attended Decoration Day commemorations at cemeteries, formed veterans’ groups, and organized annual reunions—from the army to the regimental level—on battlefields and in local communities.  The groups preserved battle sites, consecrated national cemeteries, and commissioned and constructed soldiers’ monuments to stand as reminders of a war that claimed the lives of 620,000 Americans and scarred thousands more.

Nearly every town in Connecticut built a monument to its Civil War veterans.  Purposefully placed in prominent locations and often by the veterans themselves, the monuments were meant to be seen. The unveiling of monuments usually occurred during elaborate and well-attended dedication day ceremonies complete with patriotic rituals, decorations, songs, prayers, and speeches.  Prominent orators made appearances on dedication days, and Connecticut’s General Hawley was always a popular choice because of his work in commemorating the war and keeping its sacrifices before the public mind.

Born in 1826 to Yankee parents in North Carolina,  Joseph R. Hawley moved to Connecticut by age 10.  Later, he helped found the state Republican Party and served as an editor of The Hartford Courant.  Hawley lived in the Nook Farm neighborhood of Hartford and, after the Confederate shelling of Fort Sumter in April of 1861, became the city’s first war volunteer. He eventually led the 7th Connecticut Volunteers Regiment and rose to the rank of brevet major general.  After the war, Hawley served one year as governor, three terms in the US House of Representatives, and the last 24 years of his life in the US Senate. Hawley died in Washington, DC in 1905. 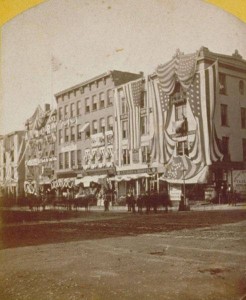 Throughout the post-war years, Hawley often participated in war remembrances around the state. In September of 1879, for example, he headed the state’s Battle Flag Day celebration, as veterans transported 80 of the state’s war colors from the State Armory to the newly completed State Capitol. Hawley also took an active role in monument planning and construction. He served on one of the first committees formed to create Hartford’s Soldiers and Sailors Memorial Arch, helped lay the cornerstone of Bridgeport’s monument in 1866, and wrote the inscription for Brooklyn’s Civil War memorial.

Hawley’s oratory skills were well known, and according to an editorial from The Hartford Courant on September 30, 1886, “No civic rite since the war has been thought complete unless the people were addressed by Senator Hawley.” This sentiment included dedication days, where he would touch on a number of issues.  For example, in Torrington in 1879, he spoke of the importance of the occasion saying, “Let monuments be raised in every town, let songs be sung and orations delivered.  Bring children to see those monuments, tell them the story of devotion.”  Hawley also made sure that people remembered the war in a manner that honored the men who fought.  In Manchester in 1880, he declared, “None of you who see this monument will ever consent to hear it called an unholy war,” and in Bridgeport in 1876, Hawley made sure the crowd knew that “monuments teach the young to love their country.”  At the dedication of Hartford’s Memorial Arch 21 years after the war’s end, General Hawley despairingly spoke of his disappearing generation and hinted at his worry for the country’s guidance saying that, “Young men who were born after Lee’s surrender are this year putting their first votes in the ballot box.  Fully half of those who enlisted to save the Union are in their graves.” 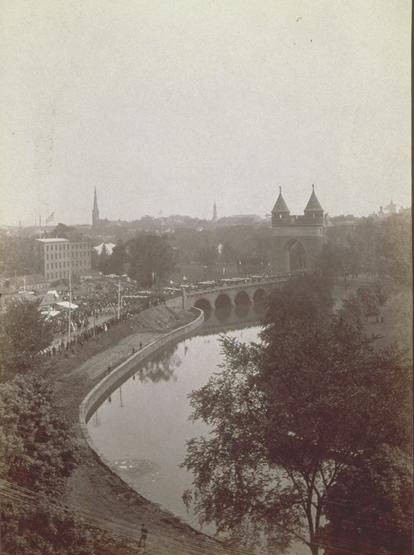 Hawley was not afraid to mention current politics in his speeches, and as a firm supporter of America’s military, he often spoke of the need to have a large, well-supplied standing army.  He was also in full support of the Spanish American War and let the people of New Britain know it during that city’s monument dedication day in 1900: “The necessity of war came upon us.  The necessity, I say.”  Yet, for most speeches, he usually concentrated on brave acts from the Civil War and, more often than not, ended every appearance by reading Lincoln’s Gettysburg Address.

Hawley lived for almost 80 years, only 4 of those years as a soldier, yet the war years defined his life.  In correspondence people always addressed him as the General, and he was always introduced as such during public appearances.  The war was important to him just as it was to so many other veterans, and he wanted it remembered.  Through his influential life, the General sought to prevent the deeds of his quickly-disappearing generation from being forgotten behind the unwavering assault of time.