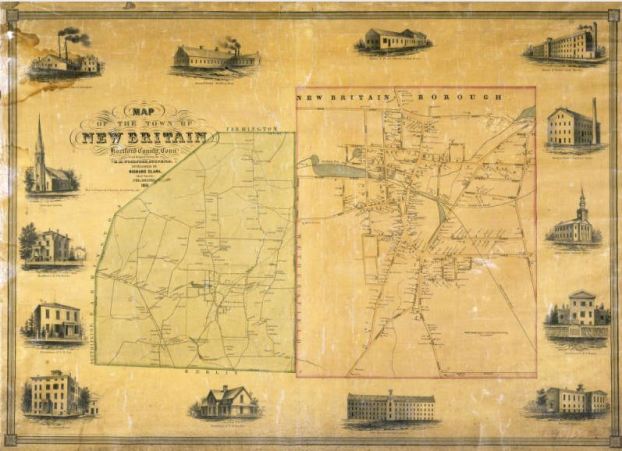 Map of the Town of New Britain, Hartford County, Conn. From original surveys by E.M. Woodford. Lithograph by Wagner & McGuigan, Philadelphia, 1851. Woodford juxtaposed a detailed map of the downtown area with a map of the entire township - Connecticut Historical Society

A handful of maps of Connecticut, Massachusetts, New Hampshire, and Maine, published in Philadelphia during the early 1850s, bear the name of E. M. Woodford. Edgar M. Woodford was born April 15, 1824, in Avon, Connecticut, where his family had a farm. Self-taught as a civil engineer, Woodford became county surveyor for the County of Hartford. A nephew recalled his Uncle Edgar as “a great strapping man,” who would come “over the hills with his [surveying] instruments over his shoulder, crying for fear his work would not come out right.” Map of the Towns of Saybrook and Old Saybrook, Middlesex County, Conn. From original surveys by E.M. Woodford. Lithograph by Wagner & McGuigan, Philadelphia, 1853. This detail of a large map shows Essex as part of Old Saybrook. It would become a separate town in 1854 – Connecticut Historical Society

Woodford became deeply committed to the Abolitionist cause and in 1856 went West with a group calling themselves “The Connecticut Colony in Kansas.” These settlers were determined to secure Kansas as a free state by moving there in sufficient numbers to outvote the slaveholders. In 1857, he was back in Hartford to encourage other like-minded individuals to join them. When the Civil War broke out, he enlisted in the Seventh Connecticut Volunteer Infantry, under an old friend, Colonel Joseph Hawley. A brief article in the Hartford Daily Courant on October 21, 1862, noted that “Quartermaster Sergeant Edgar M. Woodford, 7th Conn. Regiment from Avon, died recently at Hilton Head of congestive fever, after an illness of less than twenty-four hours.”

Although Woodford’s name appears on a brownstone monument in the West Avon Cemetery, his family’s effort to retrieve his body were unsuccessful, and he rests in an unmarked grave in the National Cemetery at Hilton Head. More than 50 years after his death, at a memorial service in 1913, a family member recalled his “noble and precious life,” remembering him as “a man of marked abilities” who “filled an important place in the activities and life of his community.” Today, Woodford’s maps survive as a monument to his meticulous and painstaking work, proof that in the end, the results of Uncle Edgar’s surveys always came out right.