Why Was New Haven Divided into Nine Squares? 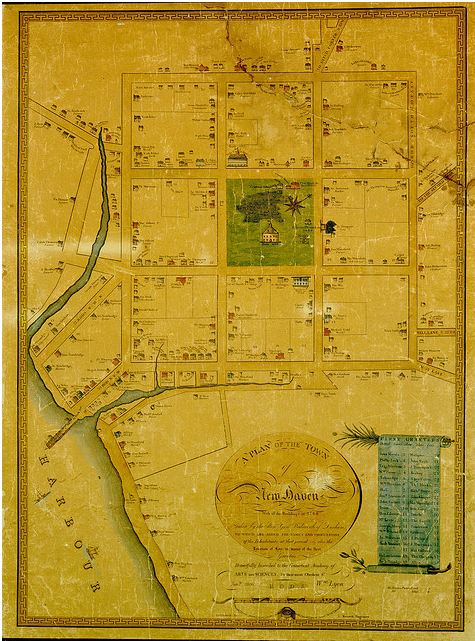 A Plan of the Town of New Haven with All the Buildings in 1748 by James Wadsworth. New Haven, CT: T. Kensett, 1806 - University of Connecticut Libraries, Map and Geographic Information Center (MAGIC) from the Map Collection, Yale University Library

The layout of New Haven’s nine-square grid, though not the plan itself, is attributed to the original settlers’ surveyor, John Brockett.  Evidence of this can be found in the Records of the Colony and Plantation of New Haven, from 1638 to 1649:

Itt is agreed by the towne and accordingly ordered by the court thatt the Neck shall be planted or sowen for the tearme of seaven yeares, and that John Brockett shall goe about laying it out forthwth, and all differences betwixt pty and pty aboute  ground formerly broke vp and planted by English there shall be arbitrated by indifferent men wch shall be chosen to that end.

Itt is ordered that Mr. Davenports quarter, Mr. Eatons, Mr. Newmans and Mr  Tenches  quarters shall have their first divisio of upland to begin att the sea side after the small lotts are layd out, and so goe on to the cow pasture, and to have their meaddow in the east meaddowes. ..

Brockett laid out a street a half a mile long running parallel to West Creek, the original landing point for the colonists arriving in Quinnipiac Harbour from Massachusetts aboard the Hector in 1638. Using the street as a baseline, Brockett mapped out a town plat (or area of land) a half-mile square, which was then divided by two parallel streets running east and west and two running north and south. Forming nine equal squares, the plan left the center square as common space with the meetinghouse in the middle. The common space, called the market-place, is today New Haven’s Town Green.

The other eight squares or quarters were fenced and assigned for house lots in relation to the amount invested in the common stock of the company.  The quarters were commonly known by their principal occupants: Governor Eaton, Robert Newman, John Davenport, Edward Tench, and George Lamberton.  New Haven’s Nine Squares are bounded by the streets known today as George, York, Grove, and State.

The Map of 1641, commonly credited to Brockett and which can be viewed in the atlas above, indicates how the house lots were assigned to every free planter—those that had invested in the common property of the plantation.  The Atlas of Old New Haven provides an interesting look at the evolution of the town in and around the Nine Squares through reproductions of early maps. From early on the market-square served as a gathering place where citizens came together to worship, to protect and educate community members, report for military service, conduct business, make laws, mete out punishment, and to bury the dead.

Of note on the Wadsworth Map of 1748 are the three cannons located on the Elm Street side of the market-place as well as the Grammar School, the “Goal” or jail, and the County House along College Street. The original Yale College Building is also depicted on the corner of College and Chapel Streets.

The Stiles Map of 1775 depicts the New Brick Meeting House which was completed around 1757 and includes the first indication of the burying ground on the green. The Stiles Map also shows a row of elm and buttonwood tress that once encircled the square. In the Map of 1802 the streets are identified with their current names and the burying ground is more clearly defined.  At this point all of the original Nine Squares had been intersected by new streets and half of the market square is identified as the Public Parade. In the Buckingham Map of 1830 a lock of the Farmington Canal can be seen in the lower right hand corner but the original Nine Squares have become much harder to find until you focus on the Public Square in the middle. At this point the buildings are represented by shaded areas and the 8 squares surrounding the original market square have been broken up into much smaller squares.

So, consider using a map to help answer your questions. It is a great place to start research, and you will be amazed by what you might find.

New Haven Museum. “A Guide to New Haven Maps in the Whitney Library,” 2016. Link.
New Haven Museum. “A Location Key to the Brockett Map of 1641,” 2016. Link.
Wadsworth, James. “A Plan of the Town of New Haven with All the Buildings in 1748.” New Haven, CT: T. Kensett, 1806. University of Connecticut Libraries, Map and Geographic Information Center - MAGIC, Yale University Library, Map Collection. Link.
“Map - Plan of New Haven. to the Mayor, Aldermen & Common Council of the City of New Haven This Plan Is with All Due Respect Most Humbly Dedicated by Their Most Obedient Humble Servant, Amos Doolittle.” New Haven, CT: A. Doolittle, Engraver, circa 1800s. Connecticut Historical Society. Link.

Lyman, Dean B., ed. An Atlas of Old New Haven, or, “the Nine Squares” as Shown on Various Early Maps. New Haven, CT: Chas. W. Scranton & Co., 1929. Link.
Hoadly, Charles. Records of the Colony and Plantation of New Haven, from 1638 to 1649 Transcribed and Edited in Accordance with a Resolution of the General Assembly of Connecticut, with Occasional Notes and an Appendix. Hartford, CT: Case, Tiffany and Company, 1857. Link.