Torrington Recovers after the Flood of ‘55 In August of 1955, two hurricanes that moved through Connecticut caused a devastating flood of the Naugatuck River. The town of Torrington was the first to be hit by the flood, which also destroyed parts of Thomaston, Watertown, Waterbury, Naugatuck, Shelton, Seymour, and other close-by areas.

Between August 18th and 19th, Torrington received 14.25 inches of rain from Hurricane Diane—only one week after Hurricane Connie dropped 4-6 inches of rain in the area, saturating the ground and swelling local rivers. When the Naugatuck River flooded its banks, the water rushed through Torrington, wiping out the downtown area and destroying homes, businesses, roads, bridges, and local utilities.

While the damage caused by the flood made national headlines, an equally compelling and less appreciated story involved the resilience of local residents and their recovery from one of the worst natural disasters in the state’s history. Within just a few weeks of the flood, Torrington businesses and factories began reopening. Local, state, and federal government officials undertook a major reconstruction initiative. A new planning commission designed a successful redevelopment project, and a new housing authority provided homes for those displaced by the flood and the local redevelopment. 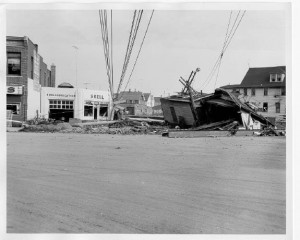 On the outskirts of Torrington, a new, modern six-lane bridge that provided greater access to the city replaced the Center bridge, which the flood had washed into the heart of the city (along with eight local businesses). As part of the new $2-million-dollar flood control plan, officials initiated the removal of old dams and provided for three new flood control dams, including the one at Hall Meadow Brook (completed in 1962), which provided protection to Torrington, Harwinton, and Litchfield. In addition to new dams, the Army Corps of Engineers dredged new channels in the Naugatuck River—making the river wider, deeper, and safer than it was in 1955.

The response of Torrington residents and officials in the aftermath of the Flood of ’55 brought rapid revitalization to the city and the surrounding area. In fact, Torrington Mayor Anthony G. Gelormino was so impressed with the town’s progress that in 1960, only five years after the flood, and still several years before the completion of the new redevelopment plan, he proclaimed, “Torrington stands today a new city, a living memorial to the efforts, the sacrifices and determination of a people who refused to be beaten by flood devastation.”