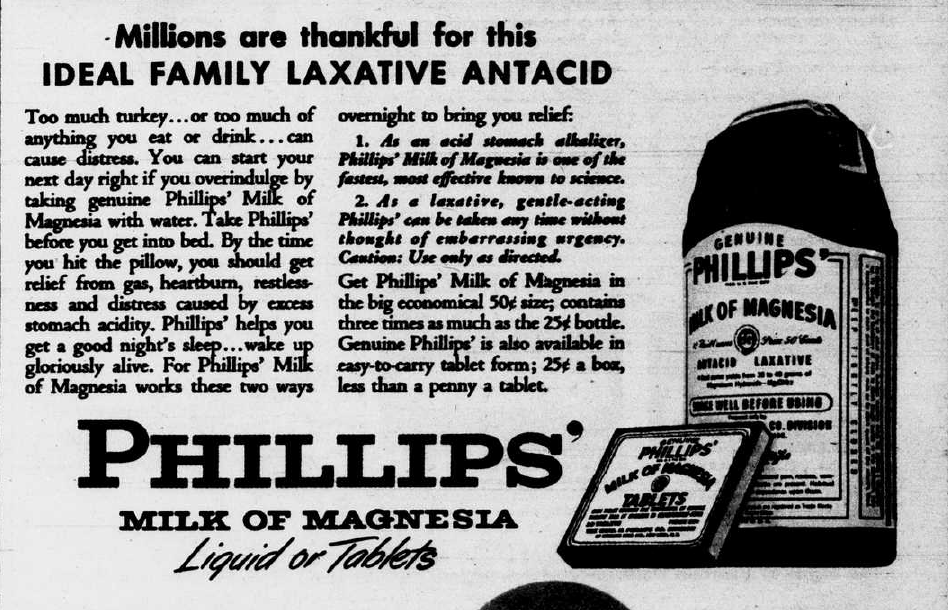 Thanksgiving advertisement for Phillips' Milk of Magnesia in the Washington DC Evening Star, 1945 - Library of Congress Trademark registration by C.H. Phillips for Milk of Magnesia brand Preparation of Magnesia – Library of Congress Prints and Photographs Division

In 1873, Charles H. Phillips patented Milk of Magnesia and his company produced the popular antacid and laxative in Stamford, Connecticut, until 1976. Phillips, an English chemist (period term for pharmacist), immigrated to America in the mid-19th century; by 1849, he had started the Phillips Camphor and Wax Company in the Glenbrook section of Stamford. The company’s first products were white wax, refined camphor (a skin treatment), and high-grade essential oils for medicinal uses. Phillips Milk of Magnesia, however, became one of the most recognizable household remedies of the next century.

The Development of Milk of Magnesia

To compete with other successful pharmacists and physicians—such as Sir James Murray, an Irish physician who developed “fluid magnesia” in the early 1800s—Phillips sought to develop an alternative product with a better taste and an improved ability to relieve digestive acidity. Using magnesium sulfate and other compounds, Phillips created magnesium hydroxide (hydrate of magnesia). When further diluted with water, the substance became a milky textured liquid that he dubbed “Milk of Magnesia.” Phillips’ 1873 patent application—filed with fellow chemist, Lawrence Reid—claimed his product effectively treated infantile diseases, digestive problems of adults, female pregnancy issues, gout, and heartburn. Even though Phillips advertised and sold Milk of Magnesia from a New York address, the company actually produced the medication in Stamford. It was so popular that Phillips shifted production away from his earlier products to focus on his new bestseller. Later, the company marketed other products—such as cod liver oil, wheat phosphates, and cocoa powder for soda fountains—but Milk of Magnesia outlasted these offerings to reign supreme.

The Sterling Drug Company continued production in Stamford until 1976, when it shifted its operations to Gulfport, Mississippi. In 1994, Bayer AG acquired the over-the-counter U.S. business division of Sterling Winthrop from the British firm Smith Kline Beecham. The purchase included Phillips Milk of Magnesia and its iconic blue bottle.