The huge granite mill that still straddles the river in Willimantic, Connecticut, today symbolizes a cotton thread factory that long dominated the history of that city. The name on that building, “American Thread Company,” moreover, marks a development of major historical importance—the incursion of an out-of-state multinational corporation into locally owned industry, a sign of how “big business” came to Connecticut as it did to America during the Progressive Era of US history (roughly 1890-1920). 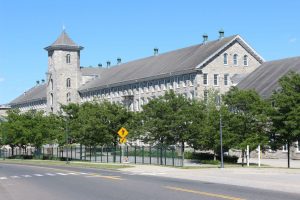 The mill originated in 1854 when Hartford investors formed the Willimantic Linen Company. That firm first produced coarse linen cloth but switched to “six-cord [spool cotton] thread” and grew rapidly through the Civil War era and after. By the 1880s, it comprised four large granite mills, employed a thousand workers, innovatively installed electric lights, and benevolently provided housing, a library, and a food cooperative for workers. The firm marketed its highly-quality cotton thread to homemakers on the commercial ground that its strength and smoothness was best for sewing machines, and on the patriotic ground that it used only American cotton and labor. How ironic, then, that Willimantic Linen sold out to the American Thread syndicate formed by English and Scottish textile interests in 1899. In Progressive-era parlance, it was the “Thread Trust,” a monopoly run by foreigners. How did this happen?

The American Thread Company’s Acquisition of the Willimantic Linen Plant

The acquisition grew out of domestic and international economic conditions that caused the United States’ Great [business] Merger Movement of 1894 to 1905. Willimantic Linen greatly prospered through the 1880s, but found its sales sagging when depression began in the 1890s. Just then, the J&P Coats Company of Paisley, Scotland, was completing its campaign to seize control of the American thread market. To avoid US tariffs, the firm bought up local American plants, and then it absorbed British competitors along with their American subsidiaries—a process called “horizontal integration.” In the mid-1890s, Coats next integrated vertically by invading the American thread distribution system. Jobbers and thread producers led by Willimantic Linen protested these actions using Progressive rhetoric. As one newspaper exclaimed, “Every patriotic citizen in America will rise universally to praise the stand taken by the Willimantic Linen Company in fighting down the oppressing hand of this monster trust combination.” Yet, British and Scottish investors eventually got control of Willimantic Linen. The takeover came through an apparent British rival to the Coats trust, the English Sewing Cotton Company organized by the Dewhurst family of Yorkshire, England, but soon infiltrated by Coats interests. English Sewing Cotton hired New York City lawyer John R. Dos Passos Sr., father of the famed left-wing novelist and legal architect of the American Sugar Refining Company, to incorporate the American Thread Company under the laws of New Jersey, authorizing that new firm to buy and consolidate 14 yarn and thread manufacturers in the United States, including Willimantic Linen. Hard times and plummeting stock values forced Willimantic Linen to surrender to this foreign-owned business. When American Thread offered to buy up Willimantic stock far above market value, Linen Company directors and stockholders seized the opportunity. In 1899, hence, American Thread assumed control of Willimantic Linen, as well as mills in Holyoke and Fall River, Massachusetts, and eleven other places.

Prosperity in Willimantic, but Break-Up of the American Thread Monopoly

Willimantic residents were initially jittery about the merger, fearing mill shutdowns and job losses, but English investors ultimately poured millions of dollars into local plant improvements and worker housing, while leaving local operations under longtime Willimantic company managers. The newly acquired Willimantic plant grew steadily through the early 1900s, but then suffered disruptions. In 1912, workers protested unfair wage increases in a successful strike led by Industrial Workers of the World organizers. Then, in 1914, a federal anti-trust suit forced the American Thread Company to separate from its Scottish owners, leaving the Willimantic plant as part of an American-owned corporation based in New York City.

The Advent of Business Consolidation in Industrial Connecticut

American Thread’s arrival in Willimantic in 1899 demonstrates Connecticut’s role in the Progressive Era’s “rise of big business” and “incorporation of America”—that is, the establishment of large, integrated national corporations in place of small local firms. As such, the Willimantic plant resembled the many consolidations of local firms that occurred across the state during this era—including the United States Rubber Company, the International Silver Company, the American Brass Company, and the American Hardware Company. At first, such Connecticut combinations remained locally controlled, but American Thread’s outside ownership signaled the 20th-century future when huge out-of-state national corporations such as J. P. Stevens, Uniroyal, Anaconda Copper, and Stanley Black & Decker would move in and absorb many of Connecticut’s home-grown industrial operations.