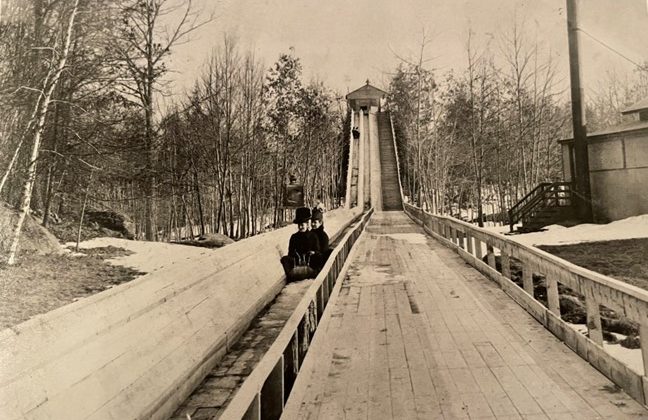 The expansion of train travel to cities and towns throughout Connecticut in the mid-1800s brought important developments to both the economy and local transportation. In Trumbull, a town of just over 1,300 people in 1850, the arrival of the Housatonic Railroad brought a lesser known but more entertaining development—one of the country’s first amusement parks. Encompassing about 13 acres in the northern part of Trumbull, Parlor Rock Park earned its name from a large boulder and rock ledges located within a remote wooded area. Children often called this “secret” hideaway among the hemlocks a “rocky parlor,” complete with a waterfall and swimming hole. When the Housatonic Railroad Company purchased the land in this area of the Pequonnock River Valley to continue its rail line in 1877, it saw that hideaway as a prime opportunity to encourage local travel. The following summer, in 1878, the company promoted it as a picnic area and soon after as an unparalleled entertainment destination—unusual in that it was accessible only by train.

Located near the Beers Mill Depot (later the Long Hill Station), the park was the railroad’s method of encouraging both tourism and business. The attraction prompted people to leave Bridgeport for the day, travel just eight miles north, and spend some leisure time in what was then considered the “country.” Once passengers stepped off the train and climbed a flight of steep stone stairs (about 15 feet high), they reached a paradise for revelry. Upon arriving at the park, four large croquet fields and an octagonal-shaped dance hall greeted visitors, some of whom called the park an “unrivaled summer resort” with all that was needed for a day’s escape from the city. The main promenade stretched past the croquet area and included several small gazebos for enjoying a picnic and purchasing refreshments such as peanuts, ice cream, and slices of watermelon. The promenade also included a photo gallery—offering people the opportunity to take a tintype photograph—and a steam-powered carousel measuring 50 feet in diameter. As visitors made their way past the promenade, they found the Parlor Rock Roller Skating Rink, a large structure complete with a raised balcony for spectators.

A circular water fountain stood closer to the croquet fields and offered a central place to meet friends. Mostly brick and concrete, the fountain had an iron bird, such as a swan or crane, with a long neck as water spout. Visitors delighted in this unusual site and used tin cups to drink from the stream of water.

Additionally, Parlor Rock Park included a man-made lake called Lake High-High, created by a dammed section of the Pequonnock River which also produced a waterfall cascading down to a rocky gorge. Crossing a wooden bridge between the falls and the gorge, visitors eventually came to a smaller lake for swimming and a picnic ground that was often the site for clam bakes. Back on Lake High-High, patrons rented rowboats for 25 cents a day, while those hoping for a bit of privacy strolled along Lover’s Walk—a trail that hugged the west shore of the lake.

Because of the park’s success throughout the summer months, the company added a toboggan slide in the winter of 1888. This 60-foot-high run with a 300-foot track, coupled with ice skating on the frozen Lake High-High, developed the park into a year-round destination. Soon, the arrival of electric lights enabled Parlor Rock to expand even more. Once evening fell, hundreds of lights glowed around the amusement park—the first place in Trumbull with electricity.

The Remains of a Bygone Era For the next 20 years, as many as 3,000 people a day took the Housatonic Railroad to Parlor Rock. By the turn of the century, however, attendance declined when the town of Trumbull became dry, rail travel decreased, and competition arose from other amusement centers like Pleasure Beach in Bridgeport and Savin Rock in New Haven. By 1908, the company had dismantled Parlor Rock Park, though the train continued to travel through the area until the rail line closed in 1932.

The current Pequonnock River Trail named a section after the old amusement site where hikers and bikers can get of glimpse of the former park. Today, the namesake rock and water fountain’s brick foundation are all that remain of this “unrivaled summer resort” of the late 1800s.