A Unique Island Attraction in Bridgeport 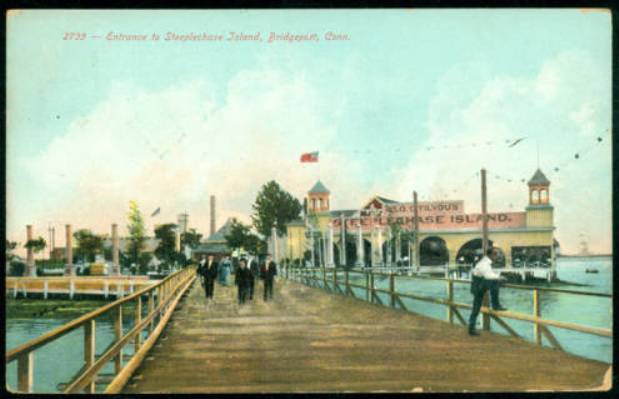 When Bridgeport annexed the borough of West Stratford in 1889, the acquisition came with a a small 37-acre parcel of land on a barrier island at the mouth of Bridgeport Harbor. The island, thanks to its promotion as a mysterious site tied to pirate folklore, became a popular tourist destination. It eventually became an amusement park known as Steeplechase Island and the Bridgeport portion is still remembered today by it later name, Pleasure Beach.

In 1905, George C. Tilyou, owner of Steeplechase Park on Coney Island bought the small park in Bridgeport. It received the name Steeplechase Island for its carousel-style horse ride that raced visitors down a metal track as if they were steeplechase participants.

Just two years after Tilyou’s purchase, the island played host to an exhibition baseball game in which a fan carelessly dropped a lighted match into some dry grass under the stadium’s bleachers. The resulting fire tore through the grandstand, the earthquake house, and the steeplechase ride. By the time the park’s manager, Paul Boynton, extinguished the flames by igniting three charges of dynamite the park had suffered $60,000 worth of damage.

Tilyou sold the park in 1910 and it took on the name Sea Breeze Island. The park hosted outings for local businessmen, Civil War reunions, and Connecticut League baseball games. Visitors to the island in 1911 even witnessed an experimental aviator take off from the park and fly over Long Island Sound for 15 minutes at an altitude of 2,450 feet. None of this, however, was enough to keep the visitors coming, and the park closed yet again. In 1919, the city of Bridgeport bought the facilities for $220,000 and expanded upon its amusements. The park now offered visitors a roller skating rink, miniature railroad, carousel, and a roller coaster. Patrons arrived by ferry until 1927, when the city completed construction of a long bridge to the mainland allowing for both foot and automobile traffic.

Unfortunately, another fire decimated the park in 1953. The blaze, first spotted among some electrical wiring, damaged the arcade, concessions, roller coaster, and amusement house. Firefighters, unable to get a hook and ladder truck across the narrow bridge, climbed to the top of the roller coaster to put out the fire. This time the damage exceeded $75,000, and though the park reopened, it shutdown for good just six years later.

Though the park closed, some of its attractions still managed to draw visitors to the island but this only lasted for a brief period. When the island’s dance pavilion burned to the ground in 1973, visitors stopped going. The final blow to “Steeplechase Island” came with the 1996 destruction of the bridge from the mainland. Today, the once-thriving amusement park is a legally protected refuge for endangered birds and plants—a quiet, reflective nature preserve that has reclaimed an island once thrumming with bright and noisy man-made amusements.

Caleb Brewster: A Patriot Against Freedom
Harkness Memorial Park Offers a Glimpse into Early 20th Century Wealth
Bridgeport Women Answer the Call – Today in History: April 15
Colt Park and the Magical Summer of 1976
Jim Flora Captures 20th-Century Pop Culture
“Tom Thumb” Born – Today in History: January 4
Sunday Funday? We Think Not – Who Knew?
Murder on the Map: The Mysterious Death of Captain George M. Colvocoresses
The Open and Fortified Country of the Human Heart: A Victorian Lady’s View of Love
The Most Famous American in the World