The Joshua Hempsted Diary: A Window into Colonial Connecticut 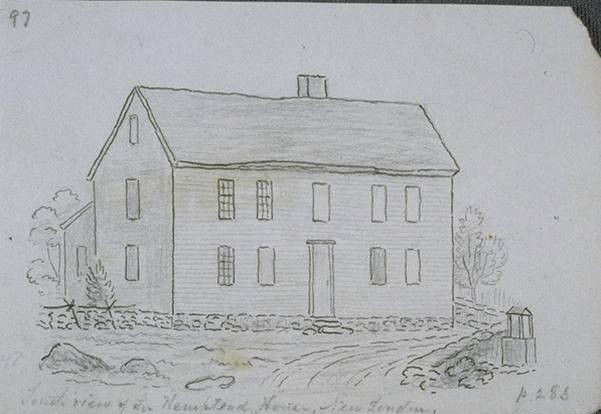 Although he practiced several trades and careers throughout his life in New London, Connecticut, Joshua Hempsted is best known for his diary. Hempsted began the diary as a way to keep track of his many business activities. He also recorded, on a daily basis, the weather, baptisms and publishments (public announcements of marrige intentions), military trainings, divisions of the Commons, court sessions, ship traffic, town meetings, thanksgivings, fasts, deaths, his travels, celebrations, and other events important to New London or Connecticut. The surviving part of the diary covers 47 years, from September of 1711 through early November of 1758. In its printed form it is about 700 pages long. Because of its thoroughness and the daily nature of its entries, it is one of the most important sources of information about colonial life that we have.

Researchers have been using Hempsted’s diary ever since it was first published by the New London County Historical Society in 1901. Frances M. Caulkins, the noted 19th-century historian of New London and Norwich, used the manuscript frequently in her research. The diary has been used to study such diverse subjects as trade with the West Indies, slavery, and the Great Awakening, a period of evangelical Protestant revival. It is also used extensively for genealogical research.

Joshua Hempsted, the son of Joshua, a wheelwright, and his wife Elizabeth Larrabee, was born in New London on September 1, 1678. He lived his entire life in the house built that year by his father. It, along with the addition built by his own son Nathanael in 1728, is still standing and open to the public during the summer. The structure is known as the “Hempsted” House, the spelling used by the first few generations of “Hempsteads.”

Hempsted married Abigail Bailey of Long Island, probably in 1698. Their first child was born in July of 1699. The Hempsteds had nine children. A few days after the birth of their ninth child in 1716, Abigail died; five days after that their oldest son, aged 17, also died. Hempsted never remarried, bringing up the children with the help of relatives and women hired to do housework and spinning. He died in New London on December 22, 1758, about six weeks after his last diary entry.

A Record of Work, Community Service, and Travels

In his earlier years, Hempsted was a shipwright and carpenter. He was a landlord, lawyer, and surveyor at various times but always a farmer. For many years, Hempsted also served as business agent for the New London Winthrops, descendants of an early governor and owners of vast quantities of land. Throughout the course of the diary, he lettered gravestones, bought pre-decorated from several sources, for families throughout the region. As Hempsted got older, he spent more time writing wills for others and less time in strenuous physical labor, but he was still able to participate in farm work. On October 31, 1758, his last working day before his final illness, he “Rid down to Crossman [lot] & unloaded the Bigger part of the Salt hay.”

Beginning in 1727, Hempsted was appointed annually as a justice of the peace for the rest of his life. He handled cases to the value of 40 shillings and also performed marriages. His casebooks and marriage records survive. The earlier casebook, covering the period 1727 to 1733, is at the New London County Historical Society. The later casebook is at the Connecticut State Archives in Hartford. Marriages performed by Hempsted are recorded in the first casebook.

Hempsted’s travels took him to Hartford, New Haven, Boston, New York City, and the eastern end of Long Island. He participated in “ventures” to the West Indies and recorded the comings and goings of ships to the many trading destinations of New London merchants. On one occasion, in 1749, Hempsted traveled to New Jersey on business for the Winthrops and continued on to visit a sister in Maryland. Along the way he recorded the many people he met from Connecticut, observations of the land he passed through and its crops, and detailed descriptions of an iron furnace, an impressive bridge, and a grist mill.

Hempsted Diary Made Available in Print

The manuscript of Hempsted’s diary, which is owned by the New London County Historical Society, consists of 12-inch-long by 7.5-inch-wide unlined pieces of paper sewn together in blocks. Miss Fannie Potter transcribed it in the 1890s for the historical society. Since the first section of the diary begins abruptly at the top of a page and consistently follows the same format of date out to the left, with the weather and then the day’s activities described, it is reasonable to assume there was an earlier portion of the diary that is now missing.

In 1901 the historical society published the diary transcription in an edition of 500 copies. It was reprinted without changes several times, the last in 1985. A new edition of the diary, with some changes in format to make it easier to read, was issued in 1999 with a revised index of people. An explanatory volume, A Useful Friend: A Companion to the Joshua Hempsted Diary, 1711-1758, was published in 2008. It features articles, maps, a glossary, and a subject index to the 1999 edition of the diary.

Patricia M. Schaefer is the author of A Useful Friend, winner of the 2008 Homer D. Babbidge Jr. Award for the best work on Connecticut history, and writes and speaks on colonial Connecticut.