Jared Eliot Calls on Colonists to Change their Agricultural Practices 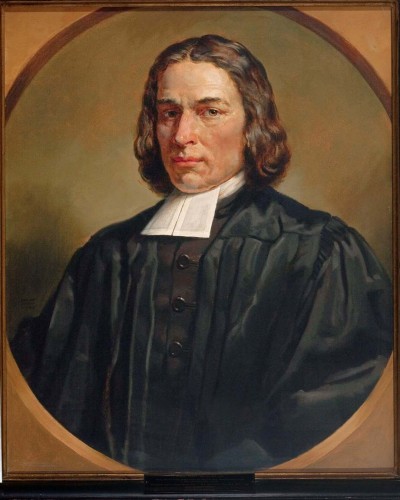 In 1760, the Reverend Jared Eliot of Killingworth, Connecticut, published the first agricultural advice book in the British American colonies. Published in Boston, Essays Upon Field-Husbandry in New-England, as it is or may be Ordered, contained a series of six essays written between 1748 and 1759 addressing various subjects he considered vital to halting wasteful farming methods and promoting agricultural improvement. Essays upon field-husbandry in New-England, as it is or may be ordered by Jared Eliot – Yale University, Beinecke Rare Book and Manuscript Library

The grandson of the Reverend John Eliot, known as the Apostle to the Indians, and son of the Reverend Joseph Eliot of Guilford, Jared Eliot came from a family of very high standing. At a time when few males had access to formal education beyond district schooling, Eliot graduated from Yale. Following his forefathers’ callings, he became a minister, holding the pulpit at Killingworth from 1709 until his death in 1763. He also practiced medicine.

Like nearly all early New Englanders, Eliot farmed, but he went a step beyond: in his 50s he began to read, observe, and experiment with an eye toward educating others. As a man of letters who held a respectable position in society and whose circle of friends included Benjamin Franklin, he had every expectation that farmers would welcome his efforts “to set before the Reader the Way of mending our poor land, and raising crops.”

When Eliot became absorbed with his study of agricultural improvement in the 1740s, few colonists were interested in conserving and fertilizing soil, cultivating better crops and halting erosion. Land was still plentiful and capital was generally scarce; people moved on when they exhausted the land’s arability. When traveling the countryside visiting parishioners, the minister saw muddy water running from over-tilled hillsides into lowlands below and knew this was nutrient depletion.

To address this problem, he studied farming methods advocated by English authors, notably Charles “Turnip” Townsend and Jethro Tull. Pennsylvania-born botanist to the American Colonies for King George III, John Bertram, also influenced him. Before publishing his essays, Eliot experimented for years on his own farm because he believed that conducting new tests based upon existing agricultural research was the only way to achieve progress. He believed that agriculture was a science, not a custom. His essays discussed English practices at length and he was careful to build his theories upon proven research before launching into recommendations.

In his essays Jared Eliot advocated:
1) ditching and draining of lowlands, where soil was naturally rich;
2) use of fertilizers such as shell sand, swamp mud, and manure, with manure being superior to other options;
3) small farms properly husbanded rather than large farms;
4) plowing deeply to increase crop yield (popular thinking ran counter to this); and
5) planting soil-building crops such as red clover.

Ditching and draining, Eliot’s first point, made sense but were difficult because ditches clogged easily, requiring more work in an already labor-intensive occupation. As to capturing manure for use as fertilizer, Eliot recommended this at a time when herds were still grazing unenclosed in many places, making collection of this natural resource impractical. Detail from Essays upon field-husbandry in New-England, as it is or may be ordered by Jared Eliot

Regarding the third point, historian Richard Bushman has observed that the minister’s advocacy of small farms was at least partly motivated by the problem of increasing migration out of the colony by the mid-1700s. The established leadership (which included Eliot) wanted people to stay put and keep land values and society in order. Bushman wrote: “Jared Eliot’s famous Essays on Field Husbandry were as much a discourse on how to be content with small acreage as a venture into scientific agriculture.” His improvements offered a practical means for farmers to get ahead where they already lived without risk of crippling indebtedness.

To implement his fourth directive, which called for improved deep plowing, Eliot invented a new drill plow that would open a furrow, plant seed, and drop manure. Unfortunately, when he sent it to Pennsylvania for testing, there were problems with alignment and it did not perform correctly. The reverend’s last point related to his belief that agricultural prosperity depended upon good pastures, which had become scarce in settled locales. He introduced a diversification system, advocating planting clover or grass during fallow years. He also recommended carrots and turnips as restorative crops. His experiments showed that planting multiple crops at once, such as oats and peas or summer wheat and barley, improved soil quality. His interests in diversification led to the introduction of mulberry tree and silk worm production in Connecticut. (This proved to be a short-lived endeavor.)

Reverend Jared Eliot, one scholar concluded, “made his contribution by calling attention to soil washing and its dangers while they were still undreamed of by most Americans. His works represented a distinct departure. They constituted the beginning of an American literature on agriculture in general and on erosion control in particular.”

Although Eliot pioneered the field of scientific agriculture, in land-abundant colonial New England his work did not have immediate impact. It was 30 years before the next American-written advice book appeared in 1790. The Reverend Samuel Deane’s The New England Farmer; or, Georgical Dictionary was published at a time when many farmers in the new nation were interested in improving their methods to meet the demands of the marketplace. In the early 19th century, there was an explosion of advice literature, with The New England Farmer the most widely read, and an eager public willing to adopt scientific practices. It was then that people started paying close attention to Jared Eliot.