At 4:00 p.m. on September 21, the great Hurricane of 1938 made landfall just east of New Haven. There was little warning. Winds and storm surge flattened cottages and other buildings all along the shore. In some places, the remains of beachfront cottages were found as far as two miles inland. Katharine Hepburn’s summer home in Saybrook was totally destroyed and Hepburn herself barely escaped with her life.

Interior sections of the state also experienced high winds and flooding as the storm passed over and continued north into Massachusetts and Vermont. Portions of Hartford, Middletown, and other Connecticut River towns were completely underwater, and people were forced to evacuate their homes in boats. Falling trees destroyed cars and buildings and blocked streets and roads. 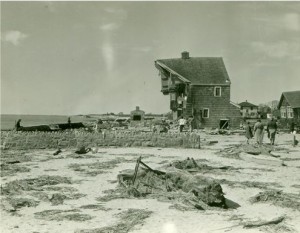 By 10:00 p.m. the fast-moving storm reached Canada, still with hurricane-force winds. Behind in New England, 600 people were dead and over 700 were injured. Nearly 5,000 buildings were completely destroyed and 25,000 additional homes were damaged. It was the deadliest and costliest storm in Connecticut’s 350-year history. Fallen trees and damaged buildings were still visible 20 years later, and every Connecticut family had stories to tell of their experiences.