Hammonasset State Park Serves the State and its Residents 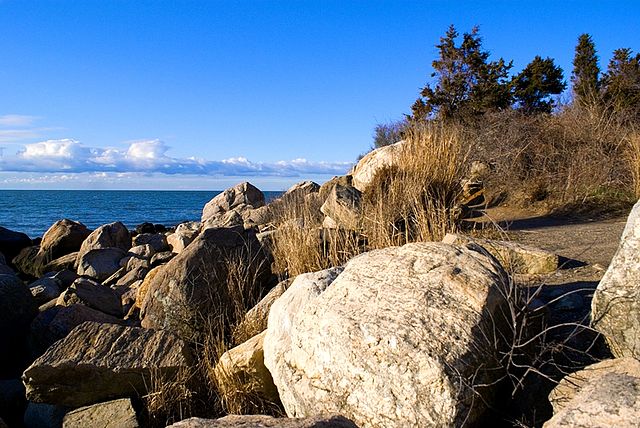 Hammonasset State Park is Connecticut’s largest shoreline park. Located in Madison and consisting of over two miles of beautifully landscaped beaches, the park provides visitors with opportunities for swimming, sunbathing, or strolling along the park’s meandering boardwalk. Hammonasset’s peaceful recreational setting, however, belies its history as a land serving the public in a variety of different ways.

Humans first made use of the area’s abundance more than 10,000 years ago. More recent history tells of its importance to regional Native groups. Those who settled the beachfront area in Madison named it Hammonasset, which roughly translates to “where we dig the ground.” Here they grew corn, beans, and squash, while also taking advantage of the area’s abundant fish and wildlife resources. European colonists arrived in the area in the early 1600s, increasing competition for natural resources and bringing with them different conceptions about land use and property. A variety of factors, from treaties and transactions to the fallout of war and disease, brought the land increasingly into European hands.

From Firing Range to Public Beach

The area around Hammonasset served a radically different purpose at the end of the 19th century, however, when the Winchester Repeating Arms Company bought the land and used it as an isolated range on which to test new weapons.

The park returned to a more natural state with its opening as a public beach and park on July 18, 1920. In its first season, it attracted over 75,000 visitors. The growing popularity of automobiles provided greater access to recreational activities for Americans throughout the United States, and consequently, after less than a decade, Hammonasset attracted over 300,000 visitors arriving in over 75,000 vehicles in 1928. State officials closed the park to the public during World War II—loaning the property to the federal government as an army reserve station and aircraft range. The army did work with the state and the general public in allowing some recreational use of the area for duck hunting season; however, most of the park was off limits until the end of the war.

In 1954, a rash of hurricanes and flooding brought significant damage to the area; so in 1955, the state appropriated $50,000 for cleaning and restoring Hammonasset State Park. That same year, trucks carrying stone from quarries all over northern New England helped create a stone breakwater at the Meigs Point end of the park.

Parks Contends with Its Growing Popularity

The popularity of the restored park only continued to grow in the decades that followed, and while it proved a success story for the local parks movement, it also created a number of challenges for the state logistically. Most troublesome was the vehicle congestion around the area during the summer months. In 1978, after hearing of the park closing due to traffic jams and overflowing parking lots, Governor Ella Grasso stepped in to appropriate state funds for adding more parking, widening the area’s access roads, providing areas for supporting bus traffic, and improving the lighting and sanitary facilities at the park. These improvements supplied much of the critical infrastructure that provides for Hammonasset’s success today.

Upon Hammonasset’s opening in the early 20th century, many considered it an important contribution to improving the quality of life for Connecticut residents. The park provided beach access to all residents during a time when waterfront access typically belonged only to the wealthy. After its opening, Hammonasset rapidly grew in popularity and today hosts over one million visitors annually. The park also reshaped the Connecticut landscape by spawning the growth of some of the state’s most popular parks—developed to help alleviate the overwhelming demands residents placed on Hammonasset.