Florence Griswold’s Home: A Story of Perseverance and Community Houses can have a life cycle, just like the people who occupy them. In Connecticut, one of the most interesting and important house stories belongs to the Florence Griswold Museum. Grandeur. Decline. Restoration. From a private home to a school for girls to an artist boardinghouse, the Florence Griswold House today celebrates a distinctive Old Lyme heritage.

Hartford architect Samuel Belcher, who also designed Old Lyme’s First Congregational Church, built the handsome Georgian-style house in 1817 for William Noyes. Its pleasing symmetry presents a stately face, with its triangular pediment jutting forward to form the entrance portico, supported by classical columns. Today, the house presents a painted yellow exterior with green shutters and white columns, trim, and fanlight, a popular early Federal color combination. The Georgian interior surrounds a spacious central hallway, creating flow through from the main road to the grand entrance, through the house, and out the back door to the gardens beyond.

The Griswold story launches in 1841, when affluent ship captain Robert Griswold bought the house and its 14-acre estate for $3,000, as a wedding present for his wife Helen Powers. Old Lyme was then a center for shipbuilding and trade, and the Griswold’s were an established Connecticut family that included two governors and a state Supreme Court judge. The house suited their social status and business needs well. Captain Griswold sailed the Ocean Queen, a packet ship carrying passengers and packages on a scheduled run between Old Lyme and London.

With the technological revolution that led steam-powered ships to replace wind-powered sailing vessels, Old Lyme lost its edge as a harbor—too shallow for the deeper-hulled steam ships. Consequently, in 1855, Captain Griswold, at age 49, chose to retire early rather than learn to helm the new ocean steamer. His daughter Florence, the youngest of four children, was just five years old. A changing economy, along with Captain Griswold’s unfortunate investment in an ox-and-horseshoe factory, drained the family’s resources. Added burden came in the 1870s, from loans to maintain the house. 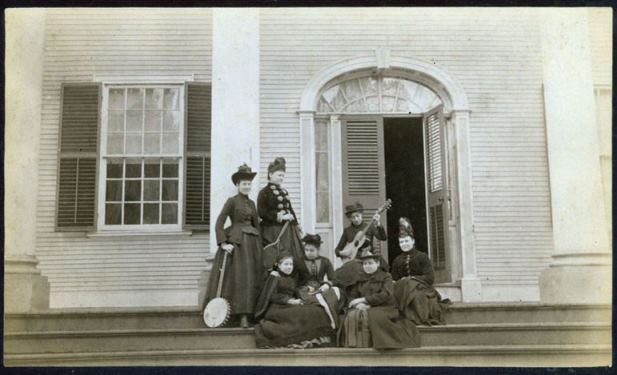 The Griswold Home School for Girls

In genteel poverty (later exacerbated by Robert Griswold’s death), Florence, her mother, and her sisters decided to convert their single-family home into a finishing school for girls and young women in 1878. At the Griswold Home School for Girls, students learned languages, history, mathematics, and English, as well as the feminine graces of drawing, elegant French embroidery, music, and singing. Students boarded at the house, too. As with sailing, home schooling became a competitive business in Connecticut, and the Griswold school closed after only 14 years.

By the 1890s, Florence Griswold was in her 40s, and as the only family member still living in the house, inherited its debts. Evaluating her options, she made the culture-changing decision to convert her childhood home once again, this time into a boardinghouse for summer vacationers craving a respite from industrialized cities. Boardinghouses were typically run by women and considered an acceptable occupation, viewed as an extension of running a home within the confines of Gilded Age morality. Griswold was a gracious hostess—optimistic, generous, kind, and tolerant—and a natural homemaker.

Family spaces soon became bedrooms. Offering very reasonable rates of $7 per week for room and board, Griswold managed to subsist. The accommodations were rustic, however. That $7 bought boarders a morning pail of water for cleaning and use of a kerosene lamp to find their rooms at night. Griswold employed two servants—housekeeper “Whistling Mary” who called boarders to meals, and “Barefoot Mary,” the cook. Boarders received three simple meals a day, featuring fruit pies and vegetables from the gardens and orchard on site. The house also contained numerous animals, as Griswold regularly took in strays, particularly cats.

The Start of the Lyme Art Coloney

In 1899, landscape painter Henry Ward Ranger stayed at “Miss Florence’s” boardinghouse and became instantly enchanted with the idyllic setting on the Lieutenant River, the quality of light so appropriate for outdoor painting of land and water, the reasonable rates, and “Miss Florence” herself as a welcoming presence. He promised to return the next summer with other artists and enact a communal vision, starting a routine that emerged as the Lyme Art Colony. The house was often full, sometimes with as many as 16 artists—crowded enough that handyman and gardener James Kent had to move to one of the nearby barns, which also doubled as artist studios. The artists created their own culture in the house with daily rituals. Arthur Heming reported on how Whistling Mary blew her two-foot-long tin horn to call in the artists from miles around for meals. The “Hot Air Club” took their meals on the porch to avoid the heat inside and generate hot air outside, as they argued over art and politics. The artists did not completely turn their days over to work—that is, painting the countryside. They set up a ping-pong table in the hall and played baseball, had picnics, and went for rides in a wagon or rowboat. They filled their evenings with parlor entertainments—music-making, theatricals, cards, critiquing the day’s art-making, and a made-up game, the “Wiggle Game,” in which one artist drew two or three squiggles on a page and challenged another artist to make a scene from them. The results often proved witty and whimsical.

Miss Florence was there every step of the way, encouraging, socializing, and no doubt tolerating the high jinx of artists turned loose like boys at summer camp—the colony consisting almost entirely of men, with the notable exception of Matilda Browne and the tolerated presence of Ellen Axson Wilson, Woodrow Wilson’s artist wife. Griswold even converted the central hallway to a gallery for the artists, selling works to curious Old Lyme residents and tourists alike.

The artists paid her back with much more then compensation for their rooms. In 1900, in gratitude to Griswold, Ranger painted a scene in a hallway door panel, then challenged Henry Rankin Poore to respond to his painting in the adjacent panel. Their paint-off, intended to be temporary, became a new tradition, with artists invited to paint a scene representative of their work directly onto a door or wall panel, first in the hall, then the dining room. Soon artists vied for the opportunity to leave their permanent mark on the house and proclaim themselves a member of the Lyme Art Colony. These 41 paintings help make the house exceptional.

During the artists’ residence period, lasting until 1937 with Griswold’s death, the style of art shifted from lyrical, golden, and moody Tonalist paintings to bright, sun-bleached color palettes of the Impressionists. But what stayed the same was the atmosphere of camaraderie, gentle competition, and “ownership” of a house that became the soul for the Lyme Art Colony.

By 1910, the house, dilapidated and crumbling outside, proved shoddy inside, too, showing the wear of the girls’ school period, along with damage from rambunctious summer residents. The artists subsequently encouraged Miss Florence to visit friends in Hartford and New York. While she traveled, they refurbished the house with their own funds, eliminating its cigar and turpentine smells, cracked ceilings, stained and mildewed wallpaper and carpets, and replacing them with fresh furnishings, upholstery, and paint. They had electricity and running water installed, reshingled the roof, and mended the chimney, porch, front steps, shutters, and windows. Upon her return, Heming reports her saying, “I never knew I had such wonderful friends…It’s a dream of a lifetime come true!”

Griswold’s bedroom became her only private space. There, she cherished family possessions like her father’s captain spyglass, a painting of one of his packet ships, and mementos from the girls school, including plates painted by her sister Louise and a fanciful painting by her other sister Adele. Griswold and her siblings did not marry or have children to help with finances, and so, plagued by debts, Griswold eventually recognized she needed to sell the house. In 1936, the Florence Griswold Association formed to establish a museum for the Lyme Art Colony. Robert McCurdy Marsh, a New York State supreme court justice, outbid the association to purchase the house and land, allowing Griswold to remain there for the rest of her life. After Judge Marsh completed construction of his new home on the property, he sold the Griswold house to the association, which opened it as a public museum in 1947. In 1955, the association merged with the Lyme Historical Society, and in 1993, the house became a National Historic Landmark.

Reopened in 2006 after a $2.5 million restoration, the museum shows the first floor of the house as it appeared around 1910, at the height of the artist colony period. The second floor now serves as a rotating gallery of the museum’s permanent collection, and the 11-acre grounds showcase barns and a restored artist studio. The house has come full-circle, embracing grandeur once again.

Rena Tobey is an American art historian, with special focus on women artists working before 1945. She is also creating a tabletop board game on the adventures of art and art history.