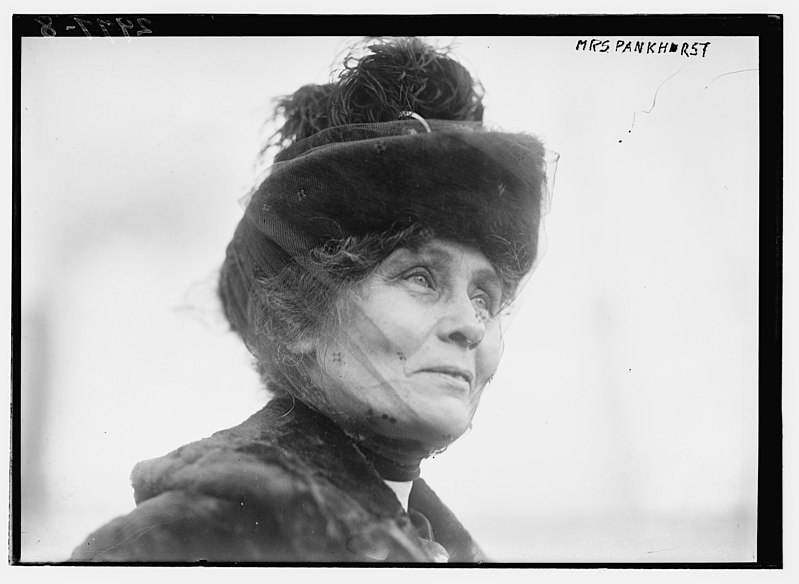 In the early 20th century, women in both the United States and the United Kingdom fought for the right to vote. While remaining distinct, the suffrage movements in both countries often overlapped and shared information and inspiration. In 1913, a famous British suffragist, Emmeline Pankhurst, gave a powerful and memorable speech on the steps of the Parsons Theater in Hartford.

“A Soldier Who Has Temporarily Left the Field of Battle” As a political activist, Emmeline Pankhurst played a vocal role in organizing rallies and helping women earn the right to vote in England. This militant champion founded the Women’s Social and Political Union (WSPU), staged hunger strikes, and took part in countless demonstrations. As a result of their combative tactics, police arrested Pankhurst and her fellow suffragists—including her daughters and sister—numerous times. Pankhurst roused crowds on both sides of the Atlantic, including during her visit to Connecticut and several other states as part of a speaking and fundraising tour in November 1913. This specific occasion was her fourth, and most memorable, visit to Hartford.

Upon Pankhurst’s arrival in Connecticut’s capital city, fellow suffrage leader Katharine Houghton Hepburn—president of the Connecticut Woman Suffrage Association and mother of film star Katharine Hepburn—introduced her to an enthusiastic crowd of both women and men. With persuasive rhetoric, Pankhurst captivated her audience and detailed the struggles that women in England faced in the battle for suffrage. Saying she did not “come here [to Hartford] as an advocate,” Pankhurst called herself “a soldier who has temporarily left the field of battle in order to explain . . . what civil war is like when civil war is waged by women.” The Guardian named her 90-minute “Freedom or Death” speech one of the 20th century’s greatest speeches.

With a banner reading “Resistance to Tyranny Is Obedience to God,” Pankhurst alluded to the American Revolution and patriots such as Patrick Henry, saying, “We will put the enemy in the position where they will have to choose between giving us freedom or giving us death.” Anti-suffragists, she said, were “the enemy,” but true “American suffragists can advocate very well for themselves.” She shared her belief that violence and sacrifice were needed to achieve results for the suffragist movement.

Pankhurst often referenced the war “waged by women,” telling the audience that “people have suffered, but you cannot make omelets without breaking eggs.” She explained how necessary it was for women to become voting rights advocates and to adopt revolutionary methods to win the right to vote, a right which was inherently theirs—specifically because like men, they were human beings. Despite this obvious fact, Pankhurst reminded attendees that women earned a poverty wage, had no right to their husband’s land, and no legal say in their children’s upbringing. These inequalities, she emphasized, could change with the vote.

Continually stressing the need for radical action and perseverance, Pankhurst said women could be slow to rouse, “but once they are aroused, once they are determined, nothing on earth and nothing in heaven will make women give way; it is impossible.” For those who thought women could not succeed, she said the suffragists in England made their government “face this alternative: either women are to be killed or women are to have the vote.”

The Impact of Pankhurst’s Hartford Speech Newspaper announcement of Emmeline Pankhurst’s arrival in New York prior to her speech in Hartford in 1913 – The South Norwalk Evening Sentinel, Norwalk Public Library

Throughout the speech, which held her audience rapt, Pankhurst continually defended the militancy of the British suffragettes, emphasizing that it was only way to force her government—and the US government—to acknowledge women’s rights. Despite the violent and aggressive tone of her speech, Pankhurst earned approximately $1,400 in donations (worth over $40,000 today). In covering the event, the Hartford Courant criticized Pankhurst, calling her a “notorious militant” who defended her cause “not with great result.” As history has shown, however, Pankhurst and her speech energized the women’s movement of the early 1900s in Connecticut and throughout the country. In the 1990s, Time Magazine named Pankhurst one of the “100 Most Important People of the 20th Century” and writer Marina Warner said that Pankhurst “shaped an idea of women for our time.”

On July 2, 1928, the English Parliament granted women the same voting rights as men. Emmeline Pankhurst, however, did not live to see her activism come to fruition as she died several weeks earlier. Women in the United States earned the right to vote eight years prior when Congress ratified the 19th amendment on August 18, 1920.