Lyme, in New London County, is located in southeastern Connecticut on the Connecticut River and adjacent to the Long Island Sound. Formerly East Saybrook, the town separated from Saybrook in 1665 and named in 1667. The southern section of Lyme became the municipality of Old Lyme in 1855. An important early shipping channel, the Eightmile River connects to Hamburg Cove, the river’s only navigable waterway. Shipbuilding, lumber, farms, and ferries were the major early industries. Having instituted zoning regulations as early as 1943, Lyme has managed to preserve much of its rural character and relatively undeveloped landscape. 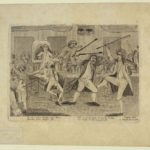 Roger Griswold: A Governor Not Afraid To Challenge Authority

Roger Griswold was a lawyer, judge, and politician who spent... …[more]