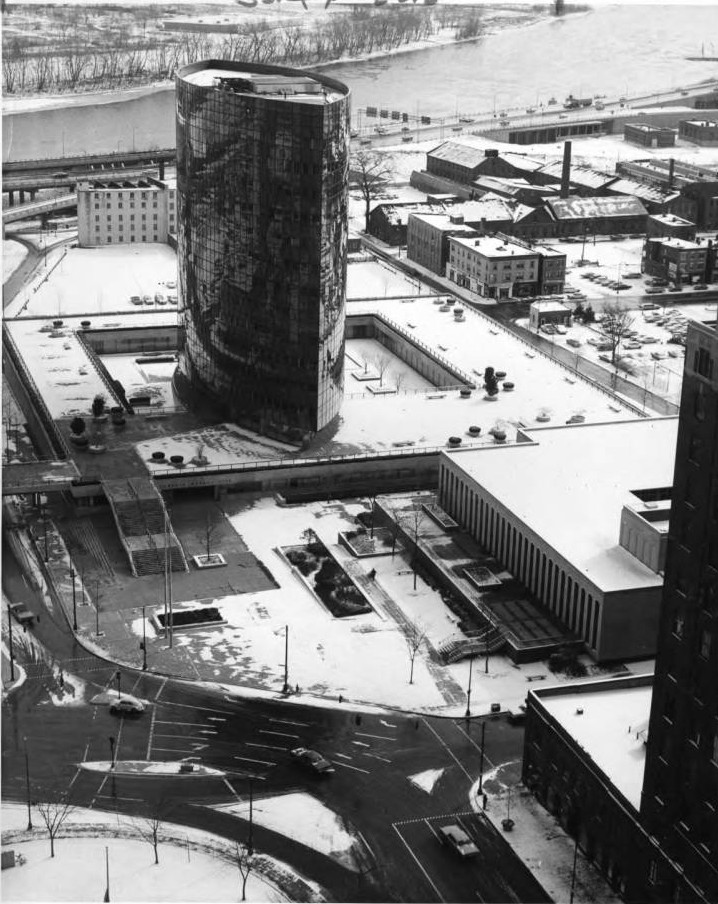 The Phoenix Mutual Life Insurance Building, also known locally as the “Boat Building,” is home to the Phoenix Mutual Life Insurance Company at One American Row in Hartford’s downtown. The building, a major architectural landmark in the city, is a significant example of the modernist architectural style that was prevalent in urban renewal projects in the 1950s and 1960s. The building was completed in 1963 and was listed on the National Register of Historic Places in 2005.

Known technically as an elliptic lenticular cylinder or lenticular hyperboloid, the 13-story high-rise was the world’s first two-sided building and was designed by recognized 20th-century master Max Abramovitz of the firm Harrison & Abramovitz. (Abramovitz was also known for his role in designing two New York City landmarks—the United Nations Headquarters and Lincoln Center.) Abramovitz designed the building as he envisioned it: a reflection of a daring and progressive company. Some 225 feet along its axis and 87 feet at its widest point, it is oriented so that its pointed ends face east and west and the sides face north and south. Constructed of steel with glass curtain walls, the building today looks as modern and contemporary as it did when it was built in the 1960s.

The construction of the Phoenix building began in 1961 and played a pivotal role in Hartford’s urban renewal movement. The company’s decision to remain in Hartford assured the development of the adjacent Constitution Plaza complex, which was one of the earliest urban renewal projects in the nation and Connecticut’s first. State and national newspapers followed every step of construction and in 1964, the first year of operation, 12,000 visitors toured the building.

In 2010, the building was awarded Silver LEED (Leaders in Energy and Environmental Design) certification from the US Green Building Council. It is the second existing office tower in Connecticut to obtain this distinction. It also is the first New England office building to be both LEED-certified and on the National Register of Historic Places.

Colt Park and the Magical Summer of 1976
Where Mr. Twain and Mrs. Stowe Built Their Dream Houses
Gideon Welles Appointed Lincoln’s Secretary of the Navy – Today in History: March 7
The Astronomical Event of the Century
A Valley Flooded to Slake the Capital Region’s Thirst
WDRC AM/FM – Connecticut’s Oldest Commercial Radio Station
The House That Hoadley Built
“Washburn Colonials”: Distinguished 1920s Homes Stand the Test of Time
“Something to Show for Our Work”: Building Brainard Airport
Vietnam Protests in Connecticut