Music Vale Seminary in Salem Credited as Being First in US 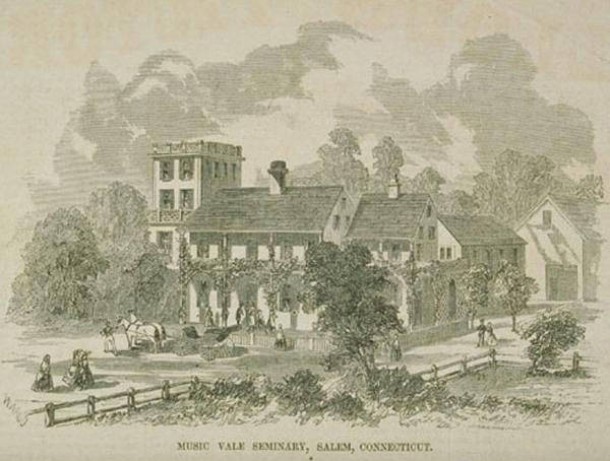 In the mid-19th century, Orramel Whittlesey founded a music conservatory in Salem, Connecticut. The conservatory served as a boarding school attended primarily by young women who came from all over the country. First known as Mr. Whittlesey’s School, then the Salem Normal Academy of Music, and finally the Music Vale Seminary and Normal Academy of Music, the school is often credited with being the first music conservatory in the United States. A determination of its founding date varies from 1835 to 1839 (due in part to its modest early enrollment), but the institution served as a music conservatory for approximately 40 years, before finding a second life as a nature preserve over a century later.

Orramel Whittlesey was born in Salem in 1801. Growing up the son of the Reverend John Whittlesey, a prominent local minister, Orramel and his two brothers, John and Henry, embraced their passion for music by teaching themselves piano. To avoid their father’s disapproving eye, the boys practiced secretly, often at night. Orramel eventually left Salem for Buffalo, New York, where he worked as a piano maker, but returned to his hometown years later to teach piano.

As Orramel’s classes began to grow, the Music Vale Seminary began taking shape. In 1839, word of the quality of Whittlesey’s instruction spread and his conservatory began receiving students from areas outside Connecticut’s borders. By the mid-1800s, Music Vale Seminary had 80 students, mostly women. Whittlesey served as the school’s principal, and a number of his daughters, who started out as students, eventually became teachers there. 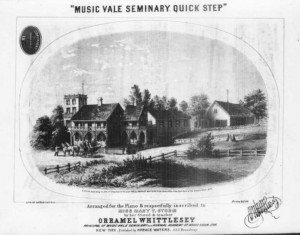 A typical day of instruction involved awaking at 5:00 a.m. to dust pianos and practice before breakfast. The curriculum included theoretical studies, voice lessons and instruction on such instruments as the organ, piano, and harp. Students practiced four hours per day, mixed in with time devoted to studying theory. Lessons in theory focused on an understanding of musical notation, harmony, and the general laws of counterpoint and fugue. (Counterpoint entails adding one or more melodies as accompaniment to a first melody whereas fugue involves composing for several voices or parts.) While study went on inside rooms, monitors were posted outside to make sure students followed all required rules of the conservatory.

Whether or not Whittlesey’s school was the first in the country to confer music degrees has been the subject of some controversy. While the Connecticut Tercentenary Commission has credited the Music Vale Seminary as conferring degrees on students as early as 1849, the State Department of Education of Connecticut records indicate that normal schools first received degree-granting power in Connecticut in 1932. This has led many to speculate that what Whittlesey conferred on students was a normal, or teaching, certificate rather than a degree. Regardless of the nature of recognition received by students, the Music Vale Seminary graduated approximately 20 students per year during the height of its enrollment.

The fortunes of Whittlesey’s conservatory began to take a turn, however, with the outbreak of the Civil War. Enrollment at Music Vale Seminary declined precipitously in the 1860s as many of its southern students dropped out to return home. Then, in 1868, the building was lost to a fire. Although quickly rebuilt with new amenities, like bathrooms, enrollment at the school never recovered to its pre-Civil War levels. After Orramel Whittlesey’s death in 1876, his daughters tried to keep the school in operation but had to close it just a few years later.

After years of relative idleness, the latter half of the 20th century brought a form of rebirth for the seminary property. John Morgan Bodman, a Whittlesey descendant, bought the Music Vale house and property in the 1960s with the intention of turning it into a summer residence. Bodman, along with his wife Helen, eventually retired there. In 1996, the Bodman family donated much of the acreage to the Salem Land Trust. This land is now protected as a wildlife habitat tied to the preservation of the Eightmile River watershed.