Frances Laughlin Wadsworth: Sculpting the Past 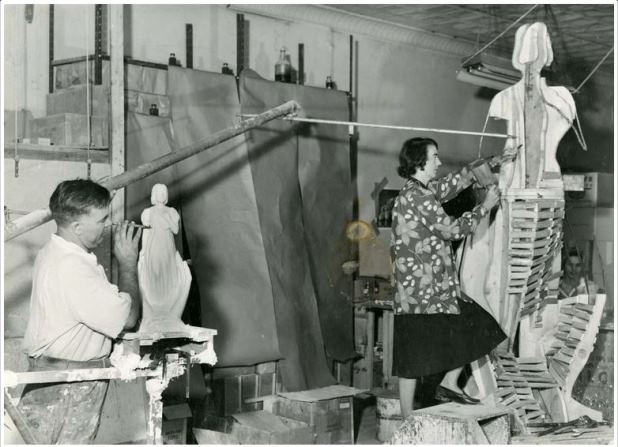 Frances Laughlin Wadsworth certainly left her mark on the art world. She also left it scattered about the city of Hartford. Frances Laughlin was born in Buffalo, New York, on June 11, 1909, to Frank and Martha Laughlin. She graduated from St. Catherine’s School in Richmond, Virginia, and studied art in Europe under the tutelage of famous sculptors. An avid painter as well as sculptor, Frances identified painting as more of a hobby, like her interest in gardening, than as a serious art endeavor in line with her sculpture. Frances moved to Hartford when she married Robert H. Wadsworth, an executive at Travelers Insurance Company and a descendant of Daniel Wadsworth, founder of the Wadsworth Atheneum. Frances began to make a name for herself in Hartford, and eventually around the country, as a talented sculptor. Her statues include “Safe Arrival” in Tower Square in downtown Hartford; the memorial to children at the West Hartford Methodist church; a statue at Sheltering Arms Hospital in Richmond, Virginia; and a statue of Helen Keller and Anne Sullivan at Keller’s birthplace in Alabama.

A few of her statues focused on celebrating specific events in Connecticut’s history. Her obituary in the Hartford Courant on April 18, 1978, notes the statue of Thomas Hooker at the Old State House as “her most difficult commission.” Supposedly, this is because there are no known likenesses of Hooker, no paintings, silhouettes, or even descriptions of the founding father of Hartford. According to the newspaper, Frances looked to his character and descendants to create a likely depiction of the famous gentleman.

Another of her well-known statues stands at the corner of Asylum and Farmington Avenues and depicts Alice Cogswell, as a young girl, being held up by two enormous hands. (Alice had lost her hearing and speech as a child, prompting her father to seek means by which she might be educated and learn to communicate.) Alice clutches a book, while being supported by hands in the shape of the deaf-mute sign for “light.” The statue was commissioned in 1950 by the New England Gallaudet Association to commemorate the founding of the United States’ first school for the deaf that originally stood near the intersection.

Frances was also interested in art education. In the mid-1930s, the Institute of Living established a Department of Educational Therapy in order to provide psychiatric patients with an education that would help them when and if they returned to society. Frances joined approximately 40 others in teaching classes in sculpture, drawing, and painting to patients. She also demonstrated the art of the sculptor at schools throughout Connecticut.