Helen Keller in Connecticut: The Last Years of a Legendary Crusader By Laura Jensen for Your Public Media

“Security is mostly a superstition. It does not exist in nature…. Life is either a daring adventure or nothing.”

One of the most famous women in the world lived the last years of her life in Connecticut—Easton, Connecticut, to be exact. In 1936, Helen Keller moved to a sprawling house that she named Arcan Ridge, where she lived for more than 30 years with her many dogs and her assistant, Polly Thompson. Helen devoted the majority of her life to civil liberties and was a founding member of the American Civil Liberties Union (ACLU). A self-identified socialist, she also believed in birth control and the suffragist movement. In 1964, President Lyndon B. Johnson awarded Ms. Keller the Medal of Freedom, and she was the first woman to receive an honorary doctorate from Harvard University. 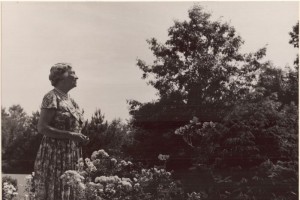 Helen was born a healthy child able to see and hear. As a toddler, she was struck with a severe fever (speculated to be the result of Scarlett Fever or Meningitis). When the fever broke her parents were elated, believing their daughter had escaped death. The elation quickly turned to despair as they realized their happy, gregarious, curious little girl could no longer see or hear. Young Helen’s struggle to learn to communicate as a deaf-blind person is well known, having been depicted in books, theater, and television.

Helen Keller died in her sleep at Arcan Ridge on June 1, 1968. Funeral services were held at the National Cathedral in Washington DC, and her ashes were disbursed next to those of her teacher Anne Sullivan and her long-time assistant Polly Thompson.

In 2006, Helen Keller was inducted into the Connecticut Women’s Hall of Fame.

Laura Jensen was formerly a volunteer in the graphics collection at the Connecticut Historical Society. She now teaches at Central Connecticut State University.