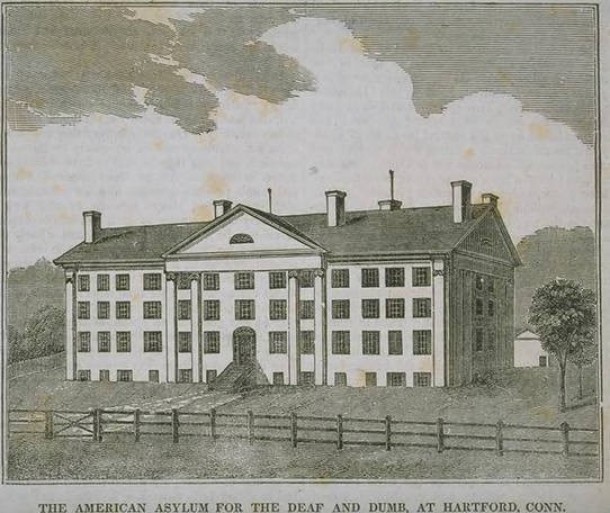 Thomas Hopkins Gallaudet, a Congregationalist minister, is acclaimed today for his role in pioneering education for the deaf in the United States and establishing the American School for the Deaf in Connecticut. Born in Philadelphia in 1787, Gallaudet was the oldest of eight children. His parents, Peter Wallace Gallaudet and Jane Hopkins Gallaudet (a descendant of early colonial settler Thomas Hooker), relocated to Hartford, Jane’s birthplace, in 1800. He attended the Hartford Grammar School, earned a bachelor’s degree at Yale College in 1805, and completed is master’s degree there as well.

After graduating with a distinguished record, Gallaudet tried his hand at law, working for a prominent firm in Hartford, but poor health forced him to resign. He then earned a degree in divinity from Andover Theological Seminary (now Andover Newton Theological School) in Massachusetts, but his continued health problems prevented him from taking a permanent position as a pastor. Instead, he became a traveling minister, visiting communities throughout the Northeast as his health permitted. He also taught basic education in religion and American history to children in towns that did not have appointed schoolteachers. While visiting his family in Hartford, Gallaudet became acquainted with Alice Cogswell, a deaf-nonspeaking nine-year-old. He taught her to write basic words by pointing to objects and using a stick to draw letters in the dirt. Her father, physician Mason Cogswell, encouraged Gallaudet’s education of his daughter and made his extensive library available to him. Gallaudet also began to read about European experiments in which educators were attempting to develop a system of signs and signals that would enable the deaf and mute to communicate. Eventually, Cogswell asked Gallaudet to travel to Europe to study these schools for the deaf.

Gallaudet first tried to visit the Braidwood schools for the deaf in England and Scotland, but the Braidwood family had no interest in helping a potential competitor for students learn their methods. During that trip, however, Gallaudet met a French Catholic priest, Abbot Roch-Ambroise Cucurron Sicard, head of the Royal Institution for Deaf-Mutes in Paris. At Abbot Sicard’s invitation, Gallaudet journeyed to France and studied with the school’s faculty. His tutors included Laurent Clerc, a deaf priest who was among those working on a manual communications system, an early version of sign language.

Father Clerc joined Gallaudet on his return to the United States, and the two traveled throughout New England, tutoring the deaf and raising funds for a school. Cogswell and his friends also helped raise the money needed to open the American Asylum for Deaf-Mutes (the school’s name in its incorporation papers, filed in 1816). Located in Bennett’s City Hotel on Prospect Street in Hartford, the school officially opened on April 15, 1817, as The Connecticut Asylum for the Education and Instruction of Deaf and Dumb Persons. The first class included Alice Cogswell.

The American School for the Deaf

Gallaudet, the school’s first principal, liked neither the name nor the location of the school. Fortunately, a grant from the United States Congress enabled the school to move to a three-acre campus in West Hartford, and the school’s board renamed it the American School for the Deaf. Gallaudet’s personal life also flourished. In 1821, he married Sophia Fowler, a deaf graduate of the school who was originally from Guilford. They had eight children, including Edward Miner Gallaudet, who would go on to found the school in Washington, DC, now called Gallaudet University. An advertisement from the Connecticut Courant for the Asylum for the Education of the Deaf and Dumb, September 8, 1829

Thomas Gallaudet resigned as principal of the American School for the Deaf in 1831, after many conflicts with the school’s board of directors over such matters as an increase to his salary (he was paid less than some of the school’s teachers) and expansion of the school’s resources. Gallaudet served as chaplain to both Hartford’s city jail and the Hartford Retreat for the Insane before his health deteriorated, leaving him bedridden for the last year of his life. Gallaudet died in 1851 and was buried in Hartford’s Cedar Hill Cemetery.

The work of the American School for the Deaf continues today. Situated on more than 50 acres, this residential campus offers a range of educational programming for deaf and hearing-impaired students ages 3-21.