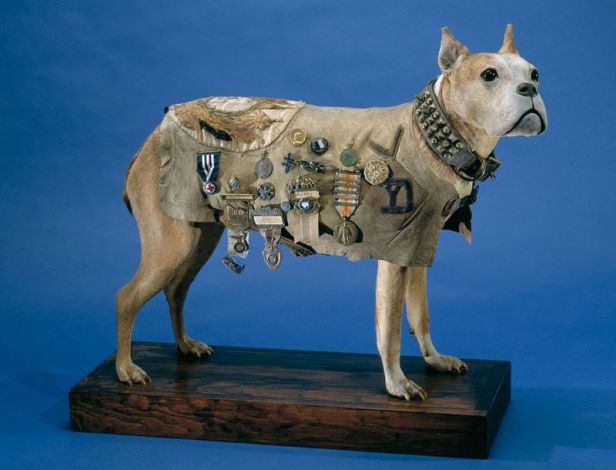 In 1917, as the 102nd Infantry, 26th Yankee Division of the US Army trained and camped around the Yale Bowl in New Haven, a stray dog wandered into camp. Private J. Robert Conroy found the short-tailed puppy and named him “Stubby.” The dog quickly became the mascot of the 102nd Infantry, despite an official ban on pets in the camp.

When the division shipped out for Europe to fight in the First World War, Private Conroy managed to smuggle Stubby aboard the SS Minnesota the transport that brought the Connecticut troops to France. Stubby received special orders (as the division’s mascot) that allowed him to travel to the front lines with the rest of the troops when it came time for battle.

While on the front lines, Stubby’s role evolved from morale-boosting mascot to comrade in arms. After surviving an enemy gas attack, Stubby became extremely sensitive to the presence of even trace amounts of gas, allowing him to warn fellow soldiers of any danger coming in the wind. He proved extremely helpful in locating wounded men in the field and even helped apprehend a German spy he found mapping out the layout of the Allied trenches. For helping capture an enemy spy, Stubby received a promotion to the rank of Sergeant, making him the first dog to receive a rank in the US Armed Forces.

In April 1918, as the 102nd Infantry joined an attack on the German-held town of Seicheprey, France, they fell under a hail of grenade fire. Stubby, who took part in the attack, received shrapnel wounds to his leg and chest. After he had his wounds treated, he was transported to a Red Cross Recovery Hospital, where he proceeded to walk around the hospital visiting wounded soldiers and boosting morale wherever he went.

Later that summer, Stubby was back in action for the recapture of Château-Thierry. Grateful women of the town made him a chamois blanket, complete with Allied flags, a military wound stripe, chevrons denoting his military service, and a variety of medals. By the end of World War I, Stubby was a veteran of 17 battles. 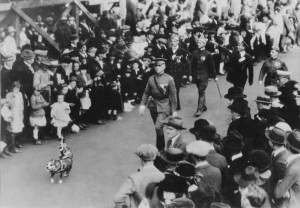 Honors for a Canine Vet

After returning home, Stubby led US troops in a pass and review parade, visited with President Woodrow Wilson, and made two visits to the White House (meeting Presidents Warren Harding and Calvin Coolidge). In his later years, Stubby followed J. Robert Conroy to Georgetown University where he became a mascot for the Hoyas, until finally passing away in 1926.

Today, Stubby’s taxidermied remains reside at the Smithsonian Institute National Museum of American History, Armed Forces Collections, in Washington, DC. He has been honored numerous times over the years. Stubby has a brick in the Walk of Honor World War I monument in Kansas City, was featured in a children’s book, and was part of a traveling tour to Connecticut. He remains the “grandfather of war dogs” and a part of our bond between humans and animals.