A Pioneering Woman in Business: Martha Parsons of Enfield Martha Parsons was born in Enfield, Connecticut, in 1869, just four years after the end of the Civil War, at a time when a woman’s place was very definitely in the home. Her father, John S. Parsons, was a prosperous farmer, but he died in 1880 when Martha was only 11 years old. Parsons’s older sisters were obliged to take jobs to help support their family. Juliaette worked as a nurse, Mary as a housekeeper, both traditional occupations for women. Martha chose a more unusual course, however. Upon finishing high school, she went to work as a stenographer with the Morgan Envelope Company in Springfield, Massachusetts. At the time, most office workers were men, and women were just beginning to make inroads in the field. In 1893, Martha accepted a new position with Landers, Frary & Clark in New Britain. Parsons’s new employer manufactured a vast array of household hardware, including meat choppers, sausage stuffers, and a household scale “specifically designed for the American housewife.”

Parsons began working for the company as a stenographer, eventually climbing her way up to an executive secretary position. Although she signed her letters “M. A. Parsons” so that customers did not know she was a woman, in 1914 the Hartford Courant publicly acknowledged her gender. One of the paper’s articles identified her as “Miss M. A. Parsons,” and noted that hers was a “unique position for a woman to hold.” At this time, secretaries—especially those at large, successful corporations—were almost always men. 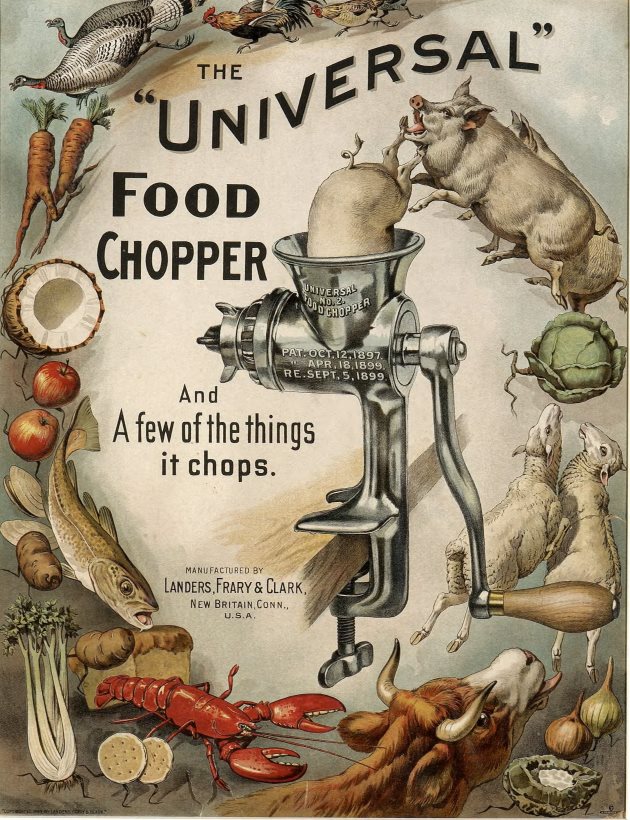 An advertisement for the “Universal food chopper, and a few of the things it chops,” Landers, Frary & Clark, ca. 1899 – Connecticut Historical Society

By the time Parsons retired in 1919, Landers, Frary & Clark manufactured electric irons, coffee makers, toasters, and stoves in addition to the household hardware they specialized in during the 19th century. Martha moved home to Enfield to live with her aging sisters, Julia and Mary. Their mother had died three years earlier, in 1916. Martha’s sister Juliaette passed away in 1942, and Mary died two years later, but Martha lived well into her 90s, finally passing in 1962.

Parsons left her family home to the Enfield Historical Society, which today operates the property as a house museum. In 2010, she received an induction into the Connecticut Women’s Hall of Fame.