Roosevelt Rides in an Electric Car – Today in History: August 22 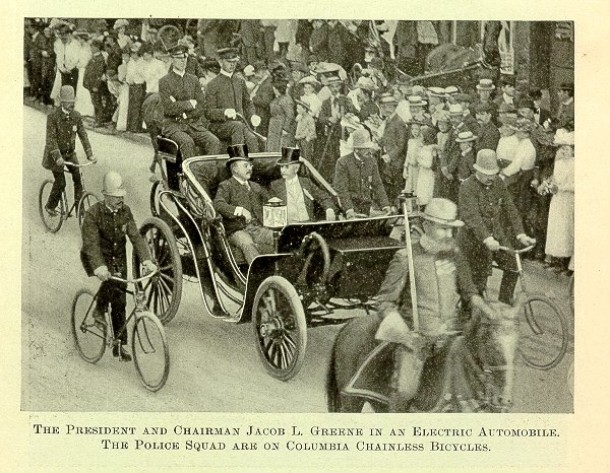 President Roosevelt and his entourage in Hartford

On August 22, 1902, President Theodore Roosevelt rode through the streets of Hartford in an electric automobile. Automobile production was in its early stages of development at the turn of the twentieth century and about half of America’s vehicles were electric.

Although Roosevelt was not the first president to ride in an automobile (that honor goes to William McKinley), he was the first to do so publicly. Accompanied by Colonel J.L. Greene of Hartford, and followed by an entourage of men on horseback, Columbia bicycles, and in cars, President Roosevelt greeted men, women, and children who lined the streets to witness what would become a familiar sight: the first presidential motorcade. The model in which Roosevelt rode was the Columbia Electric Victoria Phaeton. Like other Columbia models, the Victoria Phaeton had an external box for the driver, located at the rear of the car (one can imagine that this was a design choice left over from the days of the horse-drawn carriage). It had two 20-volt batteries that totaled approximately 800 pounds, about 40 percent of the vehicle’s total weight. The tires were made of rubber and the driver had his choice of four speeds, the maximum speed a whopping thirteen miles an hour.

The Columbia Electric Vehicle Company was located in Hartford, and made both electric and gasoline-run automobiles. The electric car was a product created by Columbia bicycle magnate Alfred Pope, one of a few successful automobile makers in Connecticut at the time.