The Free Consent of the People: Thomas Hooker and the Fundamental Orders

Linkedin
May 31, 2020 • Pre-Colonization and Settlement Up Through 1763, Thomas Hooker, Hartford, Politics and Government, Wethersfield, Windsor 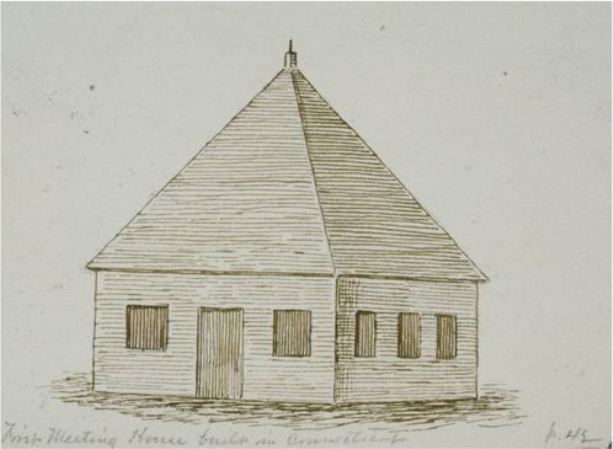 First Meetinghouse in Hartford. Drawing by an unknown artist, ca. 1836. This drawing purports to show the building where Thomas Hooker preached his sermon on May 31, 1638 - Connecticut Historical Society

“The foundation of authority is laid firstly in the free consent of people.” That principle lies at the heart of the representative system by which the United States has governed itself for more than two centuries.

But when the Reverend Thomas Hooker declared those words in a sermon in Hartford on May 31, 1638, they were a radical concept. In 1638 almost all the nations of the world were governed by monarchs, emperors, tsars, and others who wielded power secured by inheritance or conquest. Ordinary people had little, and usually no, voice in selecting their leaders or making their laws.

The Puritans whom Thomas Hooker had led to settle in Hartford just a few years earlier based everything in their lives on the Bible. Thomas Hooker believed that in the Bible God granted the people the right to select those who would govern them and the power to establish limitations on those individuals. Less than a year later those democratic concepts were put into practice. In January of 1639 the settlements at Windsor, Hartford, and Wethersfield united under a framework of government known as the Fundamental Orders. Under the Orders, citizens elected representatives to a legislature that would enact the laws of the land. The governor was elected as well.

We know the momentous words Thomas Hooker spoke on that May day 375 years ago from notes taken in an early version of shorthand by a man who heard them uttered, Henry Wolcott, Jr. of Windsor.

Diana Ross McCain was formerly the Head of the Connecticut Historical Society Research Center and author of the books It Happened in Connecticut, Connecticut Coast: An Illustrated History, Mysteries and Legends of New England, and a biography of Connecticut’s official state heroine, To All on Equal Terms: The Life and Legacy of Prudence Crandall.