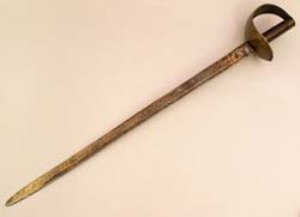 On May 18, 1808, navy agent Joseph Hull of New London negotiated a contract with Nathan Starr of Middletown for 2,000 cutlasses. Increasing hostilities between Britain and France during the Napoleonic wars had brought about assaults on American shipping and Thomas Jefferson’s Embargo act of 1807 had only added to the tensions. With the likelihood of war looming, the US Navy ramped up production of gunboats and the forces manning these vessels needed weaponry.

Nathan Starr provided cavalry swords and scabbards for the War Department after the Revolutionary War, making him the nation’s first sword manufacturer. Starr’s 1808 government contract called on him to produce this regulation Navy cutlass for $2.50 and a pike for 75¢ to be delivered in four months’ time. Starr manufactured a cutlass with a straight single-edged 30-inch blade. The short blade, important for men fighting at sea, made the cutlass easy to handle as the men boarded and fought on the crowded decks of small vessels and it was much less likely to get caught in the rigging. Starr produced the cutlasses (which were intended for use by the lower ranks) out of crudely forged steel, with a maple handle and a cup guard—to protect the swordsman’s hand—out of common sheet iron. Starr’s 1808 cutlass design saw heavy duty when the United States allied itself with France, sparking the 2½-year conflict with Great Britain known as the War of 1812.

Starr continued to produce armaments for the Navy delivering another 1,000 cutlasses at $3.00 each for a contract signed January 15, 1816. These cutlasses resembled the earlier model but had a shorter 25-inch blade and a thicker grip. Starr’s last contract was in August 21, 1826, for 2,000 cutlasses and scabbards.