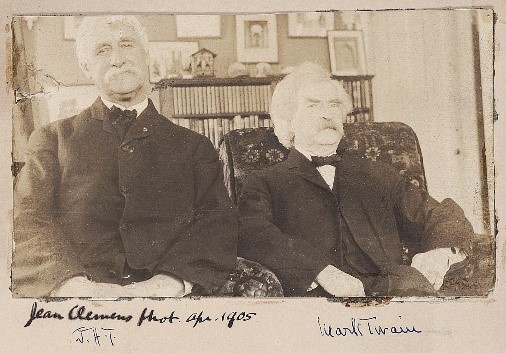 Joseph Hopkins Twichell grew up as the son of a deacon and tanner in Plantsville, Connecticut. He did what was expected from his father, Deacon Edward Twichell, and studied for the ministry before seeking greater adventure and becoming a chaplain for a Civil War regiment. He eventually became the pastor of Asylum Hill Congregational Church in Hartford; a position he held for 47 years.

It was in Hartford that Twichell met Samuel Clemens, also known as Mark Twain, and the two became close friends. Clemens’ friendship allowed Twichell to talk freely, unrestrained by his well-drafted sermons, and inspired Twichell to subtly push Victorian social boundaries, taking up such causes as labor rights, immigration, education, and interfaith advocacy. Joseph Hopkins Twichell was born on May 27, 1838 into a pious family living at the corner of Prospect Street and West Street in Plantsville, Connecticut. From the family farmhouse Twichell walked to the tannery his father co-owned on Eightmile River, where Joseph learned to grind bark and scrape hide. In 1851 Edward Twichell became a deacon of the First Congregational Church of Southington and, as his son grew up, encouraged Joseph to pursue a career in the Church. Thanks to his business success as partner in both the tannery as well as the prominent H. D. Smith & Co. carriage hardware factory, Edward was able to afford his son an education at Yale. There Joseph studied for the ministry but managed to irk his father by wasting money on social clubs and sports, and later, getting suspended for involving himself in a street brawl. Nevertheless, Joseph graduated in 1859 and immediately entered the Union Theological Seminary in New York. While there, the Civil War called him to action and he joined the 2nd Excelsior Regiment (later named the 71st New York Volunteer Infantry) as their chaplain, helping soldiers deal with the stress of separation from family and the horrors of war. After the war concluded, Joseph Twichell completed seminary and became the first pastor of Hartford’s new Asylum Hill Congregational Church in 1865. He married Julia Harmony Cushman that same year and by 1875 the couple settled down together in the stately Italianate house that once stood at 125 Woodland Street, eventually having nine children. It wasn’t long before they met Samuel Clemens, the author known as Mark Twain, who Twichell found himself immediately drawn to for “the brightness of his mind, the incomparable charm of his talk, and his rare companionableness.” Soon Clemens was dining weekly at Woodland Street where, as Clemens wrote, Twichell “tried earnestly to bring me to a knowledge of the true God. In return, I read his manuscripts & made suggestions for their emendation.” The pair made a ritual of walking from Woodland Street to Bartlett’s Tower on Talcott Mountain, all the while having philosophical discussions that inspired Clemens’ story writing and Twichell’s sermon writing.

Like Clemens, Twichell was unafraid to voice his convictions. He used his position in the ministry to fight for social causes and became deeply involved in the Chinese Educational Mission. Twichell even traveled to Peru with reformer Yung Wing to gather information on the mistreatment of Chinese workers. He took what he learned there to preach against anti-immigration legislature in Hartford. Twichell also shaped Asylum Hill Congregational Church’s interfaith work, discouraging anti-Catholicism and anti-Semitism, and, after his death on December 20, 1918, was eulogized as “Eminently sane and gifted with a sense of humor, a man of heart and of natural benevolences, he frowned on rancor, and sect bigotry had no place in his life or in his dealings with his fellow men.”