In 1969, New Haven, Connecticut, attracted national attention when Black Panther Alex Rackley was killed by fellow Panthers Warren Kimbro, Lonnie McLucas, and George Sams Jr. after being held and tortured for two days. The Panthers suspected Rackley of being an FBI informant. 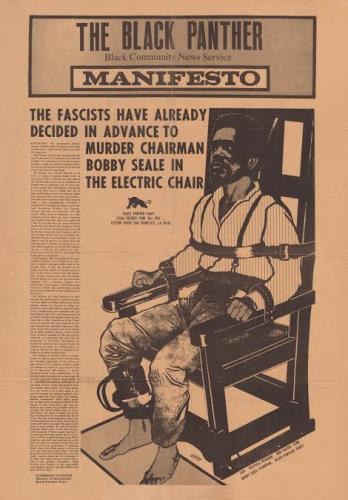 The Black Panther Manifesto. Broadside, 1970. Seale was viewed by some as a victim of a government conspiracy – Connecticut Historical Society

The Black Panther Party, formed in 1966 in Oakland, California, by Huey Newton and Bobby Seale, was a revolutionary socialist organization that strove to end the oppression of black people in the United States. It adopted a ten-point plan that called for (among other things) autonomy, employment, free healthcare, decent housing, financial reparations for slavery, the end of police brutality against black people, the release of black prisoners from jails, fair trials, and black nationalism. In practice, the Panthers focused much of their attention on policing the police, and often did so by resorting to violence. The FBI took notice, and J. Edgar Hoover said in 1968 that the Black Panther Party was “the greatest threat to the internal security of the country.” By 1969, the Black Panther Party had spread across the country.

National party chairman Bobby Seale was visiting New Haven at the time of Rackley’s murder and authorities implicated him in the crime. They also indicted Ericka Huggins, founder of the New Haven chapter of the Black Panther Party. Investigators heard her voice on a taped recording of the interrogation of Rackley before his murder. In total, authorities indicted nine people.

The trials attracted enormous attention. After swift convictions, Kimbro, McLucas, and Sams all received prison sentences, but the Seale and Huggins trials proved more problematic. Jury selection took four months. After hearing the evidence, the jury became deadlocked. Judge Harold M. Mulvey, who many expected to call for a retrial, instead dismissed the charges against Seale and Huggins. This ended the New Haven Black Panther trials.

Kimbro, McLucas, and Sams all served only a portion of their sentences before earning their release from prison. Erica Huggins went on to become a human rights activist, a poet, and a college professor. Bobby Seale ran for mayor of Oakland in 1973. He wrote two books, an autobiography and a cookbook, and continued to work with young activists.