Savin Rock Park was a seaside resort constructed in the late 19th century in the modern-day town of West Haven. Known as “Connecticut’s Coney Island,” Savin Rock Park brought together peoples of all classes and ethnicities in the name of fun and entertainment. The park’s long-lasting success made it a model for many of the state’s current amusement attractions. Credit for its development belongs primarily to one man, Colonel George Kelsey. Kelsey served with the 6th Regiment of the Connecticut Volunteers during the Civil War. An entrepreneur at heart, Kelsey spent his postwar years buying a controlling interest in a horse-drawn trolley system located in the current town of West Haven. He supplemented his transportation interests by building a 1,500-foot pier out into Long Island Sound that was capable of accommodating ferry service regardless of the height of the tides. With his transportation infrastructure in place, Kelsey began developing attractions to bring visitors to the area.

The attractions started with the construction of the Sea View Hotel, a Victorian mansion capable of housing 150 wealthy guests. Kelsey then built a park alongside the hotel and encouraged local businessmen to use his property for providing amusements for his guests. Soon there was a small zoo, museum, and a dance hall on the property. As his operation grew, Kelsey added gardens, a fountain, a bandstand, and numerous small food and souvenir stands. 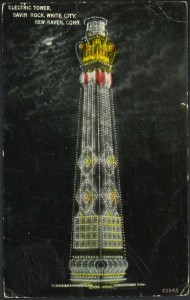 As was the case with other parks of this era, the Connecticut amusement also drew inspiration from the World’s Columbian Exposition of 1893. The Exposition’s Court of Honor, popularly known as the “White City” for its Classical-style, white-stuccoed structures, served as the model for a section of Savin Rock. Like its Chicago counterpart, Savin Rock’s White City featured a tower adorned with electric lights that lit up the night and a miniature train that took visitors on a short tour of the park.

Word rapidly spread about the attractions at Savin Rock and it was not long before the park drew in visitors from all over New York and New England. In addition, the factory workers who poured into New Haven in the early 20th century helped expand the park’s clientele to members of all classes. By this time, Savin Rock treated visitors to bumper cars, a miniature golf course, a roller coaster, and automobile stunt shows.

Problems at the Park

Operating the park was not without its challenges, however. In 1932, police raided Savin Rock Park, confiscating games and arresting 30 men for gambling. In 1938, a hurricane destroyed the giant pier that reached out into Long Island Sound. By far the biggest threat to the park, however, came from fire.

Fire victimized Savin Rock Park on a regular basis. A grease fire destroyed three buildings on the grounds in 1914. On June 11, 1932, an electrical fire caused over $100,000 in damages. Additional fires destroyed Savin Rock’s White City and, in 1951, its wax museum.

The End of an Era

In the 1960s, the era of Savin Rock Park came to an end. The growth of television and automobile travel helped facilitate its demise. In addition, urban redevelopment initiatives, like the building of General Electric’s Gold Medallion Village apartments nearby, signaled a change in American business practices. Developers saw the valuable land at Savin Rock as a potential source for year-round revenue, instead of the seasonally-limited business generated by the park. Ultimately the park’s carved flying horses and penny arcade machines made way for apartment buildings and shopping centers.