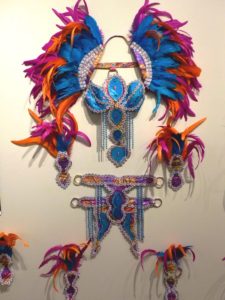 Costume from 2018 displayed in the Mas exhibit at CHS. Costume designed and built by Keimani “Q” Delpeche and the student artists of Mas Camp. – Connecticut Historical Society

A significant wave of immigration to the United States from the West Indies began in the 1940s, spurred by labor shortages during World War II. Many immigrants were drawn to the Hartford region by the surplus of available jobs in the tobacco fields along the Connecticut River Valley. Men worked in agriculture while women often found work as housekeepers, teachers, nurses, and health aides. Local community organizations helped newcomers settle in offering friendship, housing, and economic opportunities.

Today, Connecticut’s West Indian community includes immigrants from all the Caribbean Islands. They have established significant sports, cultural, and social clubs. The community sponsors dance and music groups, and produces an annual week-long festival that attracts audiences from all over the Northeast. With Greater Hartford now being home to the third largest West Indian community in the nation, beloved traditions like Carnival have been transplanted and sustained here.

The above first appeared as a panel in the Connecticut Cultural Heritage Arts Program’s Mas: Carnival Costumes from Hartford’s Caribbean Community exhibit at the Connecticut Historical Society. The entire exhibit can be viewed here.