The Thimble Islands – Little Islands with a Big History The Thimble Islands are a chain of 365 islands in Stony Creek Harbor off the southeast coast of Branford in Long Island Sound. This archipelago was first recorded as “Thimble Islands” in Branford town records in 1739 but earlier maps show them named the “Hundred Islands.” Legends say that the islands were named for thimbleberries, a relative of our native black raspberries, but are seldom found in the area. Dutch explorer, Adrian Block was the first European to discover the islands in 1614, although the Mattabesek Indians knew them well and referred to them as Kuttomquosh, “the beautiful sea rocks.” The sizes of the islands vary greatly from acres wide down to small rocks jutting up from the sea, and the majority can only be seen during times of low tide. Today, the inhabited islands are home to local residents, small businesses, and remain steeped in folklore and history. 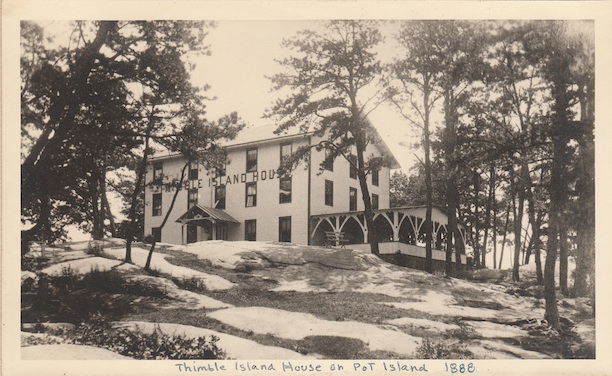 Early History of the Thimble Islands

In the early 18th century, the islands had little to no value to local residents. The terrain proved inhospitable to farming, being too rocky and too small for sufficient crops. Additionally, most were too small to inhabit. They were, however, good spots for fishing, oystering, and seaweed harvesting. By the late 18th century the town of Branford distributed the entire chain of islands to residents descended from the original Branford settlement.

Interest in the islands began to change in the mid-1800s. In 1846, local resident William Bryan built the Thimble Island Hotel on his Pot Island land. Bryan attracted tourists and treasure hunters alike by taking advantage of the legend that Captain Kidd buried his treasure on the islands. Within a month, day-trippers piled onto the steamer Hero for tours to and around the islands. By the next summer Bryan expanded his hotel, offering two bowling alleys, boating, swimming, and fishing. During the 1850s, the railroad running between New Haven and New London made the trip easy for those living in nearby cities, and the islands became a popular resort area offering a respite from busy city life. Advertisement from New Haven’s Columbian Register, July 8, 1865, for the steamer “Alice E. Preston” excursions to the Thimble Islands. Only a $1.00 for a round trip.

The area’s resort industry declined during the Civil War, but by the war’s end, tourism once again boomed. Residents built private summer cottages, hotels, and guesthouses and welcomed tourists from near and far. Large steamers upped their schedules and ferried people to the islands multiple times a day. By the close of the 19th century, Stony Creek Harbor filled with yachts, attracting a wealthy public from New York City and New Haven. At the start of the 20th century, the islands became more privatized. Local landowners and their families built private summer homes, although the numerous ferries continued to bring tourists to and from the islands.

In September 1938, a hurricane hit without warning. (Although the islands had underwater telephone lines, weather warnings did not yet exist.) The hurricane badly damaged the island properties and stranded residents. The storm swept entire residences into sea, and seven people lost their lives. The hurricane, along with the impending Great Depression, forever altered the bustling, busy islands. Hotels did not reopen and ferry service dwindled. By the 1940s, the Thimble Islands became a quiet community, for those few who could still afford it.

These days the Thimble Islands remain a quiet summer community, although recently they have witnessed a resurgence in tourism. Of the over 365 islands, only 23 are inhabited, and only six islands have electrical power brought through underwater cables. There are a total of 81 houses on the inhabited islands and they range from small summer cottages that run on generators to huge mansions complete with caretaker’s quarters and basketball courts. These properties are included in the Stony Creek-Thimble islands Historic District listed in 1988 on the National Register of Historic Places. Famous Americans also call or have called the Thimble Islands home. General Tom Thumb, of P. T. Barnum fame, once lived on the islands, and for two years in the 1900s, President William Taft had a summer home on Davis Island. The islands, although predominantly used for residential purposes, today serve a number of other purposes. Yale University owns Horse Island and it is part of Yale’s Peabody Museum of Natural History’s Ecological Laboratory, and Bear Island has a granite quarry which, in the past, exported stone to build Grant’s Tomb, the base of the Statue of Liberty, and the Lincoln Memorial. There is also a water taxi that transports people to and from the islands. As recently as the 1970s, the wealthy Svenningsen family purchased their first Thimble Islands property, West Crib. Christine Svenningsen now owns approximately half of the populated Thimble-Island properties.