On the evening of October 23, 1989, the stars descended upon the Hotel Pierre on Fifth Avenue in Manhattan. Among the most notable in attendance were Al Pacino, Tom Berenger, and Jason Robards. These actors were but a few of the over 500 guests assembled for cocktails, dinner, and entertainment at a cost of between $250 and $500 per ticket. In all, participants raised approximately $75,000, a number bolstered the following month from the proceeds of a benefit concert by Lisa Minnelli. The reason for the celebration was the 25th anniversary of the Long Wharf Theatre, located some 80 miles north in New Haven, Connecticut.

The Opening of the Long Wharf Theatre

Named for the Long Wharf redevelopment area in which it resided, the Long Wharf Theatre opened its doors in 1965 with a two-week run of Arthur Miller’s The Crucible. Initially, critics seemed skeptical of the theater’s prospects for success given its location. C. Newton Schenck, chairman of the Long Wharf Board, once recalled the criticism designers received, noting, “local politicians likened the placement of a theater in the city’s meat-packing district to bringing cabbages to Tiffany’s.” 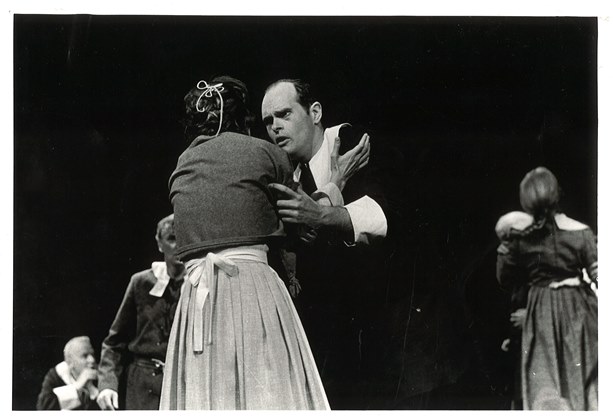 Critics may not have been far off in their initial concerns. One report immediately following the opening of the playhouse remarked that the area around Long Wharf was “born of slums and harbor marsh.” The critique went on to note the frenzied nature of the warehouse where the city’s food market and the theater coexisted. “Just a few feet from the box office men pushed sides of beef along overhead rails to trucks. Across the way two produce trucks nudged their backs to a loading platform. A sausage truck sped away. This is the city’s Food Terminal Market. It is also the home of Long Wharf Theatre, Connecticut’s only year-round residential theater.”

Despite its unlikely locale, its two founders (Yale graduates Harlan Kleinman and Jon Jory) remained optimistic that the waterfront spot on the outskirts of New Haven was the right place for the new theater. In particular, they correctly noted that its location—just six minutes from the heart of the city and right off of a major turnpike exit—would be attractive to both local and widely dispersed patrons.

Comprised of a company of 10 actors selected from across the country and a crew of 14 apprentices (most of whom were local graduate students that worked behind the scenes), the theater found immediate popularity, attracting over 30,000 patrons in its first year. Financially, local community members became some of its most fervent supporters. This included the produce wholesalers, who served as the theater’s closest neighbors, donating $20,000 towards the acting troupe’s startup.

In 1967, after two years of steady growth, the hiring of renowned director Arvin Brown as artistic director forever changed the theater’s direction. Brown, a graduate of Stanford, Harvard, Yale, and the University of Bristol in England (where his directing career began), immediately set to work establishing a national reputation for the New Haven troupe. By 1972, he realized his vision. After staging David Storey’s The Changing Room in the fall of that year, critics from the major theater markets in the United States began to take notice of both the theater and its young director. For his part, Brown attributed much of Long Wharf’s success to its Connecticut audiences, noting, “Our audience is experienced and sophisticated. It is more and more demanding, but demanding in an honest and spontaneous way . . . Wharf-goers are developing the tough-minded but open sense of anticipation that once characterized New York audiences.” Arvin Brown and Edgar Rosenblum remained at the helm of the Long Wharf Theatre for over 30 years while it continued to establish itself as a regional attraction hidden away from the hustle and bustle of Broadway. Following Brown’s tenure, Doug Hughes picked up the role of artistic director for four seasons before being succeeded by Artistic Director Gordon Edelstein and Managing Director Joshua Borenstein. Today the theater remains a thriving center of culture on the outskirts of the Elm City.

The successful rise of the Long Wharf Theatre is perhaps best exemplified by its current annual patronage of over 100,000, and its transfer of more than 30 productions to Broadway or Off-Broadway theaters. This success includes numerous award-winning productions including Wit, The Shadow Box, Quartermaine’s Terms, and The Gin Game.