The “Father of American Football” is Born – Today in History: April 7 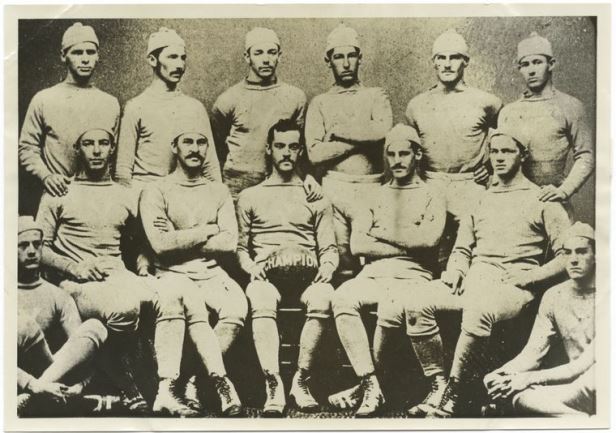 On April 7, 1859, Walter Chauncey Camp, the “Father of American football,” was born in New Britain, Connecticut. Camp was a gifted athlete who participated in baseball, crew, swimming, tennis, and track. He excelled at football, however, and played for Yale for six years–four as an undergraduate and two as a medical student. Remarkably, Walter Camp was captain of both the freshman baseball and football teams, a testament to his athleticism. He later developed the “Daily Dozen,” a series of exercises for physical fitness used to train servicemen in World War I. Walter Camp as Yale’s Team Captain from the book Football Days Memories of the Game and of the Men Behind the Ball by William H. Edwards, 1916

The Birth of American Football

Early football was a hodgepodge of soccer and rugby rules played with large numbers of players attempting to advance the ball into the goal. Often referred to as “Mob Foot-ball,” the game’s violence resulted in numerous injuries. Yale’s freshman and sophomores traditionally held a match on New Haven‘s town green but the city banned the game in 1858, forbidding its playing in the streets or on any public square.

Yale officially formed their Football Association in 1872, but in 1876, when Walter Camp started playing as a freshman, the game was still in its infancy–played under the Rugby Union rules established by the Intercollegiate Football Association. Camp served as the team captain for three years and continued to serve for much of his later life as Yale’s unofficial coach. Camp also served as a member of the national football rules committee from 1877 until 1925 while working at the New Haven Clock Company. A respected businessman, Walter Camp eventually ended up running the company, one of the largest manufacturers in Connecticut at the time.

Walter Camp is credited with altering the rules of rugby to create the game of modern North American football we are familiar with today. The line of scrimmage, use of downs, point system, the number of players per side, and the creation of the quarterback position all stemmed from Walter Camp’s influence. One of the highest-paid nonfiction writers of the time, Camp is also credited with the “long-term commercialization” of the sport, having written hundreds of articles and dozens of books extolling the virtues of football. In 1928 Yale erected a monument to Camp’s contribution, the Walter Camp Memorial Gateway at the Yale Bowl.

The Debate Over Who Could Occupy World War II Public Housing in West Hartford
The Story of Pineapple Cheese
Hamilton Breaks Air Records – Today in History: June 13
Benjamin Silliman and the Collection That Inspired the Yale Peabody Museum
The Origins and Enduring Legacy of New Haven’s Long Wharf Theatre
A Beautiful and Goodly Tree: The Rise and Fall of the American Elm
The Slaters Go Round the World
Saddles Fit For a Shah
The Hardware City Could’ve Been the Motor City – Who Knew?
Trumbull’s Parlor Rock Park: A Premier Amusement Center of the Late 19th Century