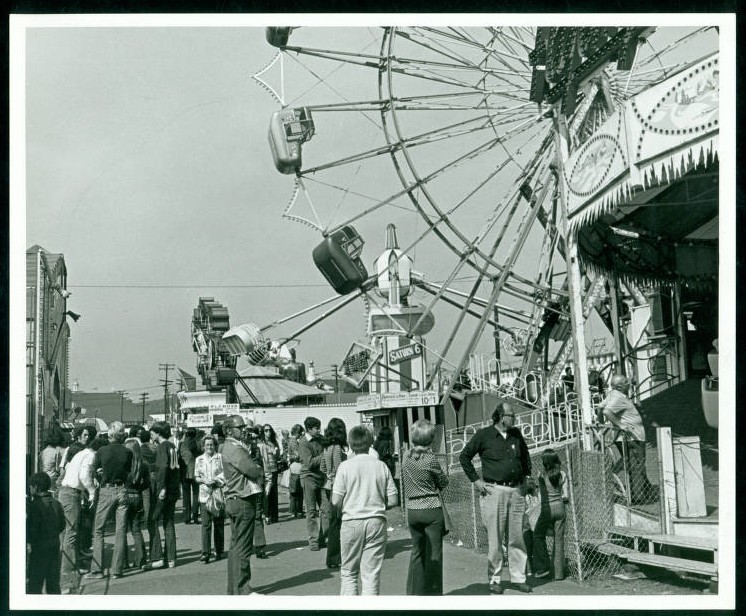 In 1821 the town of Danbury held its first agricultural fair, but it was not until 1869 that the fair became an annual event. That year, in a small tent borrowed from the Barnum & Bailey Circus, the Danbury Farmers and Manufacturers Society held the first annual fair on a property known as the Danbury Pleasure Park. Later, the society purchased 100 acres of the park’s grounds and launched what would become the Danbury Fair. By the time of the last fair in 1981, the grounds covered more than 150 acres. 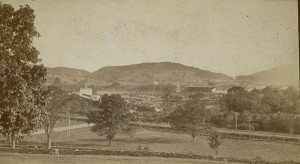 Over the years, the fair included a roster of attractions, from an oyster exhibit offered by the shellfish commission in the late 19th century to stock car races in the mid-20th century, that changed over time to meet popular trends. Heavily advertised in newspapers throughout Connecticut, New England, and New York, the fair grew each year and attracted huge crowds. Railroad and bus companies offered reduced excursion rates to fair-goers traveling from points near and far, but by the mid-20th century so many visitors traveled by car that park officials instituted a turnstile system for entering the fair, where drivers parked within enclosures then walked onto the grounds. Originally a three-day event, the annual fair eventually extended to 10 days each year. Added yearly, attractions included food booths, rides, and entertainment, although animal and farm-grown food exhibits remained the most popular draws. Suspended only twice in its long history—first in 1918, because of the Spanish Influenza epidemic and then from 1942-1945, during World War II— the yearly event was eagerly awaited by fair-goers.

Danbury saw its last fair in 1981 and the grounds were sold. In 1986, developers built a shopping mall on the site of the old fairgrounds and named it the Danbury Fair Mall, in honor of an agricultural tradition that lasted 112 years. Suspended during World War II, the Danbury Exposition took the fair’s place. In 1942 it featured a patriotic theme, USO Day, and such entertainers as Marian Anderson, the great American contralto, who lived in Danbury. A Day at the Races

By 1929, horse and auto races were the fair’s two most popular attractions. The horse races took place on the track for the first five days of the fair, and the auto races on Saturday, the last day of the fair. In 1946, a banked speedway replaced the horse track and held midget automobile races. That same year, administrators added a marine speedway for boats. The speedway eventually accommodated stock car races, which drew huge crowds. Autos at the Fair

Automobile culture figured prominently throughout the years at the Danbury Fair. From the innovations in machinery and technology of the late 19th- and early 20th- centuries to exhibits on “vehicles of yesteryear” in the mid-20th century, fair-goers could not get enough of the automobile. In 1952 one of the most popular features was the transportation exhibit, which traced the history of wheel power in the United States from the days of the prairie schooner to the fins of the ’50s. Trouble at the Fair

In 1899, the group known as Citizens of Danbury petitioned the State Law and Order League to have detectives present at the fair to stop illegal liquor selling, racy shows, and gambling. That same year, the league would assist local officers in the arrest of “pickpockets and other crooks” drawn to the crowded fair.

In 1905, a “moral wave” started by the General Assembly to regulate country fairs reached the Danbury Fair, and officials halted such shows as “Paris by Night” and “Bowery Maidens.” The General Assembly forbade gambling in all forms, and at one point it was unclear whether a crazy quilt bearing a design of poker chips would have to go. The shows that survived that year included “Minnie Ha Ha, the midget freak,” a giant turtle caught in Long Island Sound, and “Mack and Teddy, nature’s bovine noblemen.’” Food at the Fair

Food was always a big draw at the Danbury Fair. Not only were farm-grown food displays a major attraction, but concession stands–selling popcorn and peanuts in the early years–also drew fair-goers for their annual high-calorie blast. One of the most popular items in 1905 was ice cream in a cornucopia-shaped cookie—a forerunner of the now-classic ice cream cone. In 1909, soft-shell crabs outsold hot dogs, and that same year, milk dealers selling watered-down milk to the unsuspecting were identified and eventually prosecuted. 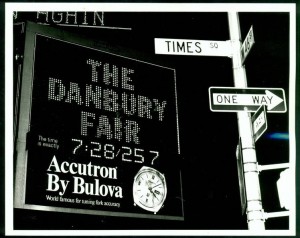 A Day at the Fair

Given a holiday on October 6, 1906, to attend the fair, 16,800 residents came despite the overcast and rainy day. This custom continued through the years with the exception of 1946. That year, 1,500 students from Danbury High School staged a successful strike and refused to attend classes on Friday of fair week, traditionally observed as Danbury Day at the fair. By noon, the school superintendent closed the schools and the fair’s owner admitted students to the fair for free.

Danbury Fair in the Modern Age

In 1945, the principal owner of the fair John W. Leahy made many improvements to the grounds, adding hard-surface driveways, fences, and new lighting and repairing buildings and the midway.

Leahy understood the changing times. In the mid-20th century, as farming dwindled as a livelihood and manufacturing rose, Leahy allowed families and individuals, and not just professional farmers, a chance to participate in agricultural competitions.

Last Day at the Fair

The oldest operating fair in America lasted for 10 days in October of 1981, attracted almost 250,000 people and then closed for good. That same year, the Wilmorite Corporation of Rochester, New York, bought the Danbury Fair Grounds for $25 million and in 1986 opened the Danbury Fair Mall.

Today, the Danbury Fair Mall stands in the place of the century-old fair grounds. At 1.3 million square feet, it is one of the largest malls in Connecticut.