The Art of Burying the Dead: Exploring Connecticut’s Historic Cemeteries 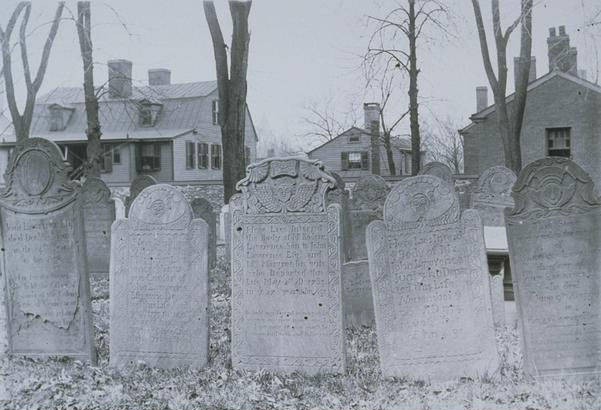 The Ancient Burying Ground in Hartford is the city’s oldest historic site and was its only cemetery from the 1640s to the early 1800s. Located downtown, the burying ground accepted anyone who died in Hartford, regardless of age, gender, race, ethnic background, economic status, or religious faith. Around 6,000 people have been buried in the site, yet only 415 people are represented with gravestones. Hiring stone-cutters to inscribe gravestones was expensive and the majority of people could not afford it.

Early gravestones only featured brief facts about the person buried underneath: the person’s name, birth date, and death date. It wasn’t until the late 1600s that decoration started to be incorporated into the design of headstones. Carvings on the gravestone’s face were typically located at the top and on the sides, flanking the inscription in the center of the stone. The earliest carvings are the “death’s head,” which featured the skull of a skeleton connected to wings. The motif soon evolved into the “angel’s head” which gave the image a more human appearance. In the early 1800s, the decorations changed to neoclassical and romantic symbols such as urns and weeping willow trees rather than Puritan skulls and angels.

The Victorian ideology of glorifying nature inspired the movement of cemeteries out of crowded cities and into the open countryside. Cedar Hill Cemetery is a product of that era and offers a dramatic contrast to the Ancient Burying Ground. Located in the South West neighborhood of Hartford, Cedar Hill Cemetery was designed by landscape architect Jacob Weidenmann, who also designed Bushnell Park. With its sprawling hills and sweeping vistas, Cedar Hill provides a tranquil resting place for the remains of over 32,000 people. Cedar Hill cemetery was established in 1864 and its grave monuments are very different from those of previous centuries. In the Ancient Burying Ground, the wealthiest people had the most elaborate gravestones. This remained true at Cedar Hill. New forms were beginning to become fashionable, especially if one had the funds to afford them. At Cedar Hill, in addition to traditional gravestones, freestanding sculptures, marble obelisks, and family crypts dot the landscape and memorialize the dead. Colonial and Victorian cemeteries can be found in virtually every town in Connecticut. Some offer popular tours in conjunction with Halloween; it is also possible to spend hours exploring them on your own, reading old inscriptions, and admiring the skillful sculptures created by those artists who specialized in the art of memorializing the dead.