Named Connecticut’s State Heroine in 1995 for her efforts to establish the first school for African American women in New England, Prudence Crandall stood apart from 19th-century societal norms and confronted the racism then common to Connecticut and New England. So significant were Crandall’s efforts to promote racial and educational equality that court cases brought against her for operating her school were cited in the historic trials Dred Scott v. Sanford in 1857 and Brown v. the Board of Education in 1954. A Life Shaped by Quaker Values

Born to a Quaker family in 1803 in Rhode Island, Crandall learned early to value peace and tolerance. Her family settled in Canterbury, Connecticut, in 1813, and at the wish of her parents, Prudence attended a Quaker boarding school founded by abolitionist Moses Brown in Providence, Rhode Island. In 1830, at the age of 27, she took a teaching job in Plainfield, Connecticut.

In 1831, after teaching in Plainfield for less than a year, and at the encouragement of many prominent residents of Canterbury, Crandall purchased the much-admired, Georgian-style house on the Canterbury town green in order to open the Canterbury Female Boarding School. With the support of a board composed of prominent lawyers, businessmen, and religious leaders, her school became extremely successful. Most of her students were the children of local families and supporters. 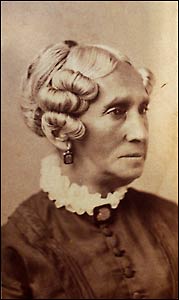 In the autumn of 1832, the young headmistress enrolled 20-year-old Sarah Harris, an African American, and the reaction of local citizens was swift. Hoping to intimidate Crandall into changing her decision, families and supporters vowed to remove their daughters from the school in protest. Crandall not only defied them, she announced that by the spring of 1833 she would enroll only African American women as students.

By the 1830s, fears of increasing racial equality among blacks and whites had become a topic of great concern to Connecticut’s white population, and the widespread belief that African Americans were intellectually inferior to whites was threatened by black attendance at an elite school. Not surprisingly, the outcry against Crandall’s school was tremendous. William Lloyd Garrison, founder of the Boston-based abolitionist newspaper The Liberator, pledged his support to Prudence after meeting her in 1832 on business with the New England Anti-Slavery Society. He promptly ran an advertisement for her school in The Liberator and provided Crandall with the names of African American families in Northeastern states who might be interested in sending their daughters to the academy. She traveled to New York and Providence to recruit students and announced the plans for her school in The Liberator, a move that made her a national figure as the controversy surrounding her school increased.

While her new students began their spring term, citizens of Canterbury and the neighboring towns encouraged the Connecticut General Assembly to pass a law banning Crandall from operating the academy.

The Black Law and Trials On May 24, 1833, the General Assembly enacted the “Black Law,” making it illegal for out-of-state African American students to attend a Connecticut school without local permission. By August 23, 1833, authorities arrested Crandall for violating the Black Law, and she was brought to the first of three trials for operating the school. Her lawyers argued that while Crandall was operating a school for out-of-state students, the Black Law was unconstitutional because African Americans were citizens and were guaranteed equal rights, including access to education, as provided to citizens by the Constitution. The first trial ended in a deadlocked jury, but the jury at her second trial found Crandall guilty when the judge declared the Black Law constitutional, arguing that African Americans were not citizens and thus not guaranteed constitutional rights.

A subsequent trial reversed the guilty verdict under the technicality that there was not enough information for a conviction. The issue of whether African Americans were citizens was sidestepped until the Dred Scott decision of 1857. Though her legal battles were over, on September 9, 1834, a mob attacked and ransacked the school while Crandall and her students were inside. Fearing for the safety of her students, Crandall permanently shut her school.

The argument Crandall’s lawyers raised and which the court ultimately avoided was finally addressed in 1857. During the Dred Scott v. Sanford trial, Judge Roger B. Taney ruled that as an African American, Dred Scott was not a citizen and did not have a right to file the lawsuit, citing the identical declaration made during Crandall’s trial. More than a century after Prudence Crandall challenged outraged citizens and the Connecticut judicial system, the 1954 landmark decision in Brown v. the Board of Education of Topeka resolved the unconstitutionality of “separate but equal” education for white and African American students, referencing Prudence Crandall’s struggle. One hundred and twenty years after Crandall pursued educational equality, the principles she so highly valued and defended finally earned legal recognition.

During her trials, Prudence had met and married a Baptist minister named Calvin Philleo. They left Connecticut in 1840 for Illinois and, later, Kansas. She lived humbly late into her life, trading the grand house on the Canterbury green for a simple rural residence. She claimed, “I shall never plead poverty. My plea will be for justice.” She died in 1890 in Kansas at the age of 87. Four years before her death, the Connecticut General Assembly approved an annual pension of $400 in an attempt to redress her persecution under the Black Law. Today, Prudence Crandall’s house in Canterbury stands open to the public as the Prudence Crandall Museum, a National Historic Landmark.

Diana Moraco received her Master’s degree in Public History from Central Connecticut State University and is currently the Membership Coordinator at the Steamship Historical Society of America in Providence, RI.

Strane, Susan. A Whole-Souled Woman: Prudence Crandall and the Education of Black Women. New York: W.W. Norton, 1990.
Member of the Bar. Report of the Arguments of Counsel in the Case of Prudence Crandall Plff. in Error Vs. State of Connecticut Before the Supreme Court of Errors at Their Session at Brooklyn, July Term 1834. Boston, MA: Garrison & Knapp, 1834. Link.
McCain, Diana. To All on Equal Terms: The Life and Legacy of Prudence Crandall. Hartford, CT: Connecticut Commission on Arts, Tourism, Culture, History and Film, 2004.