Preserving an All-American Downtown in Torrington Torrington is a city aware of its architectural heritage. Its unique and historically significant buildings are more than a source of pride; they are the foundation on which local businesses and civic leaders built a revitalized economy.

The integrity of the downtown Torrington area has survived many challenges. Among its greatest achievements are its resilience in the face of natural disasters, including the Naugatuck River flood of 1955, and its ability to prosper in a time when shopping centers and strip malls lure residents into outlying areas.

Torrington overcame these challenges with the help of a series of beautifully designed Art Deco and Art Moderne buildings in the downtown area. In an effort to preserve the city’s architectural heritage, concerned citizens and local visionaries formed the Downtown Torrington National Historic District in 1988. In 2003, they formed a second historic zone, called the Water Street Historic District. Both of these districts eventually earned National Register recognition. Fittingly, a significant portion of the recognized buildings are the work of William E. Hunt, a Torrington architect. 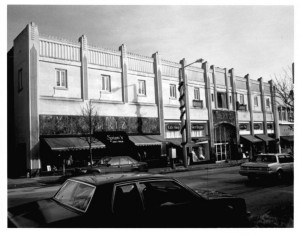 Numerous local businesses have played a significant role in the preservation efforts as well by adapting and reusing existing facilities in Torrington. For example, Artwell, a visual arts organization, opened a gallery in the Water Street district that promotes cultural growth through an impressive schedule of performances and exhibitions. Established by Torrington native Sharon Dante in the 1970s, the Nutmeg Ballet, along with the Nutmeg Conservatory for the Arts, moved into a newly renovated building on Main Street. In addition, the Mertz building in downtown Torrington, originally home to one of the oldest continually operating department stores in the country, received new life as the Carole and Ray Neag Performing Arts Center.

Perhaps the most famous preservation project in Torrington is the Warner Theater. Built as a movie palace by Warner Brothers Studios in 1931, and capable of seating 1,700 people, the building is a beacon for enthusiasts of the Art Deco style. The flood of 1955 brought extensive damage to the theater, and the arrival of the television era and soaring expenses throughout the next two decades forced it to close in 1981. With the building slated for demolition in 1982, a group of concerned residents formed the Northwest Connecticut Association for the Arts, Inc. (NWCAA) and led a grassroots campaign that saved the theater. The Warner Theater reopened as a performing arts center in 1983, and the renovation eventually reached its completion in November of 2002. Today, the Warner Theater maintains a full schedule of plays, concerts, and ballets and operates a school for the arts in downtown Torrington.