Nicholas Grillo and his Thornless Rose 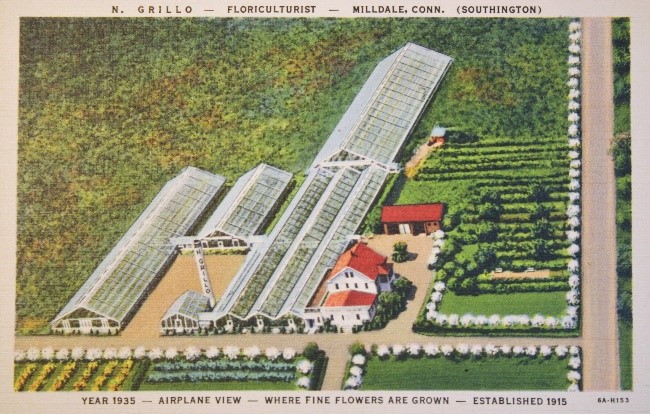 Nicholas Grillo was a self-made floriculturist who ventured from Italy to Connecticut and found success under the glass panes of his Southington greenhouses. Grillo’s floristry business earned a national reputation for the quality of its roses as well as for developing the world’s first thornless hybrid tea rose.

Cultivating a Career in Floristry Grillo in his greenhouses in May 1942 – Library of Congress, Prints and Photographs Division

Nicholas Grillo was born on July 23, 1888, in the old Sicilian town of Tusa. As a youth he dreamed of leaving the town’s stone-lined streets behind and living in the United States. It was a dream he realized on May 29, 1906, when he stepped off the SS Liguria with $20.30 in his possession and took up residence with his uncle in Rhode Island.

Within four years, Nicholas had left his uncle’s house to live in Stonington, Connecticut, and worked as a laborer at nearby greenhouses. Boarding and working with him were his brothers Salvatore (age 18) and Peter (age 17) who had recently arrived from Italy. Nicholas was the only one of the three able to speak English fluently at the time and obtained an apprenticeship under Andrew N. Pierson, a floriculturist in Cromwell. The skills Grillo learned under Pierson bred much future success.

In 1915 Grillo set up his own greenhouses at the corner of Canal Street and Burritt Street in the Milldale portion of Southington. He worked as a floriculturist, growing and selling a variety of flowers for wholesale and retail. Nicholas married Southington native Jennie Ann Castaldi in 1917. For a time after their marriage she assisted Nicholas, performing secretarial duties before Grillo’s sister Mary took over for her. Grillo was also able to help support numerous other relatives as they arrived from Italy, often landing their first jobs working in Grillo’s greenhouses or delivering flowers. His brother Salvatore lived with him and worked on Canal Street from 1917 to 1927, at which time he moved to Meriden to set up his own greenhouses with older brother Domenico under the name D. Grillo & Bros. Nicholas’s brother Peter managed the Meriden Flower Garden, and his nephew Joseph established Grillo Inc., Florists in Meriden. About the same time that his family established themselves in Meriden, Nicholas Grillo’s career reached full bloom. First, in 1923 he patented the Grillodale rose (named after himself) and eight years later, the American Pride Rose, the flower that won him gold and silver medals at the Philadelphia Flower Show and decorated a float in the 1932 Washington Bicentennial parade. Then, in 1938, Grillo developed the Thornless Beauty—the first hybrid tea rose without thorns. In the early 20th century, hybrid tea roses were among the most popular garden roses because of their large flowers, general hardiness, and sweet smell. Grillo’s Thornless Beauty had a light crimson blossom filled with fifty petals and promptly won a medal at the International Flower Show in New York. Newspapers worldwide hailed Grillo’s innovation and First Lady Eleanor Roosevelt even ordered his flowers for display at the White House.

In 1965 Nicholas retired after operating his greenhouses for fifty years. His daughter Josephine inherited the business, fully prepared by her father’s training and a degree in commerce. Sadly, Josephine grew ill and passed away on October 4, 1975, just six months after the passing of her father. The Grillo greenhouses did not outlive Nicholas and Josephine and soon disappeared from Canal Street, but a plaque sits in the gardens of the Barnes Museum in Southington to commemorate Grillo’s lush career.