Louis’ Lunch and the Birth of the Hamburger 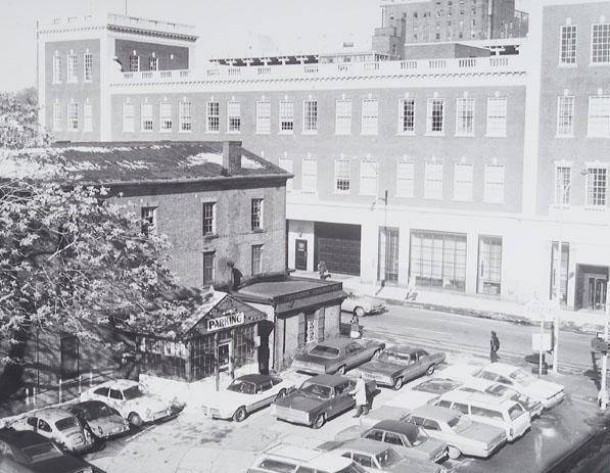 New Haven resident Louis Lassen is credited with creating the first hamburger in 1900. Answering a customer’s rush order for something “quick and delicious,” Lassen assembled a hamburger from ingredients intended for steak sandwich production. Using the materials at hand, he sandwiched broiled, ground beef between toasted bread and the offered the customer a new creation, one whose local popularity would grow into a national phenomenon. Though the business has been housed in different structures and moved several times, the Lassen family continues to prepare hamburgers using the same methods that had satisfied the hurried customer’s request. The restaurant is so popular that when, in 1974, its owners faced eviction to make way for New Haven’s sweeping urban renewal program, New Haven residents protested. 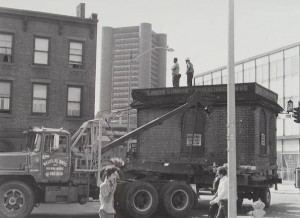 Louis’ Lunch is currently located at 263 Crown Street in New Haven. The brickwork storefront of the restaurant stands in contrast to the wheeled lunch wagon originally operated by Louis Lassen. In 1895, Lassen opened his lunch wagon on Meadow Street in New Haven to serve factory workers, and he traveled between two factory locations on Temple and George Streets. By 1907, Lassen chose George Street as a permanent location and secured his wagon alongside a local tannery. After a decade of business on George Street, Lassen purchased the tannery building, a move which provided increased cooking space and indoor seating for his popular eatery.

In the early 1960s, urban renewal efforts in downtown New Haven called for construction of a medical high-rise in the area occupied by Louis’ Lunch and other George Street real estate. Engaged in bureaucratic deliberation for nearly 10 years, the Lassens eventually relocated their 19th-century brick eatery to Crown Street, where patron-donated bricks were used to rebuild the walls of the restaurant.

Others Vie for Recognition as Hamburger’s Creator

Louis’ Lunch has not altered its original, successful format. Burgers are served only on white Pepperidge Farm toast, a company that originated in nearby Norwalk, Connecticut, in 1937. The bread is toasted in a combination gas-electric toaster and sliced diagonally, similar to their initial hamburger. Lassen burgers are served on paper plates (invented in 1904) alongside bottles of Foxon Park soda, an East Haven, Connecticut, brand with more than 80 years of local production. A Lassen hamburger served at Louis’ Lunch on Crown Street today remains faithful to the original Lassen hamburger of 1900.

Owen Rogers is a public historian who received his oral history training at Central Connecticut State University, where he works for the Veterans History Project, an archive partner with the Library of Congress.