From its earliest colonial days the area in and around modern-day Oxford was primarily agricultural in nature. The arrival of sawmills, gristmills, and wool manufacturing enterprises prospered in the newly incorporated town of Oxford in the early 19th century, but it was not long before circumstances drove the local economy back to its agricultural roots.

The majority of industry in Oxford came to a halt in 1849 when a railroad line to Waterbury was completed. Railway lines provided a greater abundance of raw materials to nearby manufacturing areas than the small waterways leading to Oxford could supply. The decline in trade with southern states after the Civil War compounded the problem and ended mass manufacturing in town. What remained was a handful of small craftsman-operated shops.

With manufacturing on the rise in surrounding areas, Oxford’s supply of mill laborers moved to more prosperous industrial centers like Waterbury and Winsted. Also, New York’s Erie Canal, completed in 1826, meant greater access to employment opportunities in New York and places far away. As a result, Oxford’s population plummeted: the town, which boasted 1,765 residents in 1830, declined to only 902 reported inhabitants by 1890. 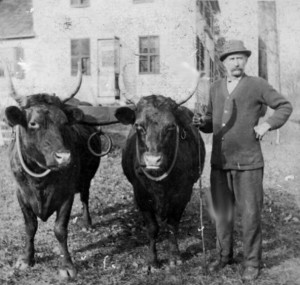 The residents who remained in town were mostly farmers. The abundant water supply that helped foster the growth of early industry now helped local residents grow increasing quantities of fruits and vegetables, manage orchards and hayfields, and raise livestock, including sheep, hogs, and the Jersey cows that began arriving on American shores in the 1850s. In addition, the declining wool industry left behind thousands of merino sheep that still produced high-quality fleeces.

The local farming industry also received a boost from a new emphasis on organization. By the 1860s, Oxford’s farming families had formed an agricultural society to facilitate the exchange of information regarding agricultural practices as well as to display the prize-winning fruits of their labor at local agricultural fairs. It was also around this time that the grange movement took hold in the United States.

The grange movement began when President Andrew Johnson requested that an employee of the Department of Agriculture survey the conditions of American farms, particularly in the South. The result was the formation of the National Grange of the Patrons of Husbandry in 1867. Its purpose was to organize farmers all over the country.

The movement eventually reached Oxford in the early 20th century. In April of 1928, Oxford farmer Charles W. Nix proposed the grange idea to his neighbors. Later that year, 24 men and 24 women founded Oxford Grange #194. At the meetings that ensued, local farmers discussed such topics as pest control, how to overcome the challenges of working in isolated locations, changes in technology, the promotion of agricultural colleges, and the creation of cooperative fire insurance companies. The results of these early efforts helped ensure the prosperity of future generations of farmers and promoted the maintenance of a way of life that still plays an important part in shaping the town’s identity.