In a circa 1950 photograph Beatrice Fox Auerbach meets with the department heads of her store, G. Fox & Company - Connecticut Historical Society

Beatrice Fox Auerbach holds an iconic position in Connecticut’s history as a retailing pioneer, community activist, and lifelong philanthropist. The granddaughter of Gerson Fox, co-founder of G. Fox & Co., she made a name for herself as president of the largest privately held department store in the country—a role she held from 1938 until 1967, ending shortly after the store’s sale to the May Department Store Company in 1965. 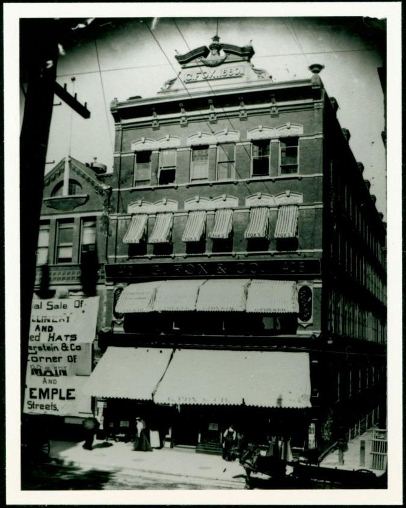 Her innovative approach to leadership included a willingness to provide promotions for minorities—a move that was rare in the retail world of her time and earned her recognition from the National Urban League and a certificate of lifetime membership in the NAACP in 1957. Auerbach also provided at-cost meals in the store’s employee cafeteria, a forty-hour work week with two consecutive days off, sick pay, retirement packages, and private funding for employee illnesses or emergencies. Additionally, under Auerbach’s instruction, the company set up a special account for employees with debts, enabling them to borrow company funds without paying interest.

Gerson Fox and his brother, Isaac, established what became G. Fox & Co. as a dry goods store in 1847. Gerson took it over the following year when his brother moved to New York. Following the original store’s destruction by fire, Gerson’s son Moses, then president, chose to rebuild the company’s flagship store at 960 Main Street in Hartford. Construction on the new store finished in 1918 and encouraged the return of Beatrice and her husband George S. Auerbach to Connecticut from Salt Lake City, Utah.

Mrs. Auerbach began working at the department store part-time, eventually rising to full-time employment at the side of her father Moses. Moses Fox left all his shares in G. Fox to his daughter, who became president after his death in 1938. Auerbach’s passion for service and love for the city of Hartford made G. Fox into the primary draw for the city’s downtown retail shoppers. A popular story around the capital city is that Auerbach arranged for the exits of Interstate 84 in Hartford to lead all drivers in the direction of G. Fox.

In 1939, she established the Moses Fox Club to honor employees who dedicated 25 years of service to G. Fox. This, and her general concern for workers, resulted in a loyalty for “Mrs. A.” from her staff of 3,000 to 4,000. She invited employees to dine with her in the store’s cafeteria on their birthdays, and during holidays Mrs. Auerbach walked the sales floor shaking hands with each member of her staff, addressing them by name.

Beatrice Fox Auerbach’s contributions to the growth of the retail industry in the United States came with a tireless dedication to philanthropy. A world traveler with no formal education, Auerbach devoted much of her life to the betterment of her community and the world. She made contributions to civilian relief efforts during World War II by establishing a unit of the Red Cross in the G. Fox store tasked with providing wound dressings. She also fostered competition among the sales staff by sponsoring war bond drives. Auerbach established the Service Bureau for Women’s Organizations and founded the Beatrice Fox Auerbach Foundation, which continued her philanthropic efforts decades after her death. This philanthropy resulted in monetary contributions made to St. Francis, Mt. Sinai, and Hartford hospitals, and to subsidized programs for the Hartford Symphony and Wadsworth Atheneum Museum of Art.

In addition, Auerbach established a scholarship fund to encourage students to pursue degrees in business and to provide greater educational opportunities for women. She served on the Board of Trustees at the Hartford College for Women, the American School for the Deaf in West Hartford, and at Hebrew Union College, in addition to being a delegate at the White House Conference on Education in 1955. A decorated civic leader in Hartford, she received the Tobé Award, given to a retailer who benefits their community and retailing nationwide (1947); “Boss of the Year” from the Greater Hartford Jaycees (1952); the Distinguished Public Service Award from the State Bar Association (1962); and the Human Relations Award of the Connecticut-Western Massachusetts Region of the National Conference of Christians and Jews (1964). She also received posthumous induction into the Connecticut Women’s Hall of Fame.

Recognition in other forms included honorary degrees at Trinity College, Saint Joseph College, and Wesleyan University. The School of Business Administration at the University of Hartford named “Auerbach Hall” after her, the library at the Wadsworth Atheneum Museum of Art became the Auerbach Art Library, and St. Francis Hospital even dedicated a new hospital unit in her name.

Following her death in 1968, one-third of her estate (totaling several million dollars) fell to the Beatrice Fox Auerbach Foundation for the continuation of its philanthropic work. Auerbach also left a portion of her financial resources to friends, employees, and the Koopman and Schiro Funds, which, established by her daughters, supported charitable, educational, and cultural philanthropic efforts.

In an era when many of the traditional big-city department stores struggle to remain viable or have already passed into history, Beatrice Fox Auerbach’s accomplishments appear all the more remarkable. As a prominent female retail executive her model for success is still held in high regard, as is her profoundly personal style of management.

Laboring in the Shade
The Merger That Was Not Meant To Be: Yale University and Vassar College
A Voice for Veterans: A Civil War era ‘Whistle-Blower’ – Who Knew?
Father of Architects Born – Today in History: December 4
Sanitary Fair – Today in History: July 25
Joseph Hopkins Twichell: Asylum Hill’s Religious Leader and Mark Twain’s Closest Friend
An Orderly & Decent Government: Making Self-Government Work, 1634-1776
Avon Industry: From Underground to Outerspace
The Legend of the Charter Oak
American Chairs, Made in Connecticut