Linkedin
July 11, 2022 • Pre-Colonization and Settlement Up Through 1763, John Winthrop Jr., Law, Politics and Government, The State 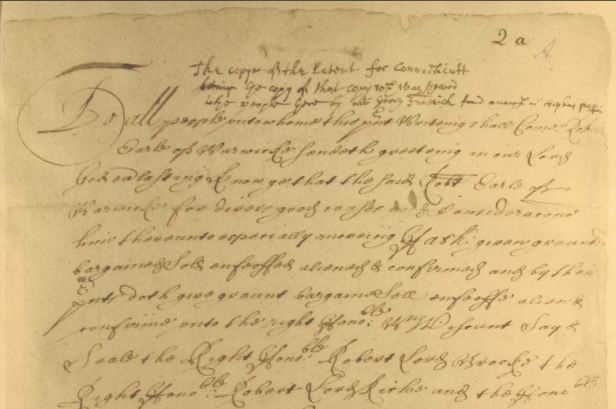 The Connecticut Charter, which provided the basis for Connecticut government until 1818, was secured because of Connecticut’s realization after the restoration of Charles II to the English throne in 1660 that the government of the colony lacked any legal foundation. Connecticut’s leaders feared that the new English government would attempt to assume absolute control over the Puritan colonies in New England. Connecticut’s leaders decided, therefore, that their best hope for preserving their liberties lay in petitioning for a legal charter from Charles II. John Winthrop Jr., Connecticut governor, was chosen for this critically important task. He sailed for England in July 1661 and succeeded, with the help of Lord Saye and Sele, Lord Brooke, and the Earl of Manchester, in securing a Charter for the colony in May 1662.

The Charter was an extraordinary document because it gave the people of Connecticut a clear legal basis for their colony, provided for the absorption of New Haven Colony, and, most importantly, granted the “Governour and Company of the English Colony of Connecticut in New England in America” an exceedingly generous degree of self-government. By the Charter, Charles II created a corporation. The members of this corporation were the freemen of Connecticut, and the company was granted complete freedom to lease, grant, sell, bargain, alienate, and dispose of property as other corporations had the right to do. The Charter provided for a governor, deputy-governor and 12 assistants, all of whom were to be elected annually by the freemen of the company. An Assembly consisting of not more than two representatives from each town elected by the freemen was to meet twice annually to act upon the business of the corporation. All legislative and judicial power was granted to the General Assembly with the reservation that the General Assembly could enact no laws contrary to those of England. The land tenure granted to the freemen of Connecticut was that of the “Manor of East Greenwich in Free and Comon Sociage,” the freest in England, in return for which the king was to receive one-fifth of all gold and silver mined in the colony. The Charter established Narragansett Bay as the eastern boundary of the colony and the “South Sea,” the Pacific Ocean, as the western boundary.

By Bruce P. Stark; excerpted from Connecticut History and Culture: an Historical Overview and Resource Guide for Teachers
(1985), edited by David Roth.

A Separate Place: The New Haven Colony, 1638-1665
An Orderly & Decent Government: Making Self-Government Work, 1905-1929
The Connecticut Ratification Convention
Eighteen Years in the Making: Connecticut’s 1991 Gay Rights Law
Elias Perkins: One of Lisbon’s Most Accomplished Public Servants
The Legend of the Charter Oak
Timeline: Settlement of the Colony of Connecticut
Alse Young Executed for Witchcraft – Today in History: May 26
An Orderly & Decent Government: A New State, A New Constitution, 1776-1818
The Importance of Being Puritan: Church and State in Colonial Connecticut