When Bozrah Provided Comfort to the Nation 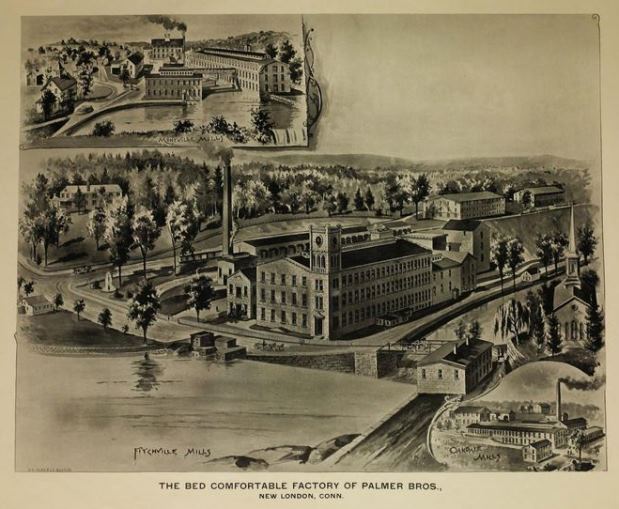 The center image is of the Palmer Brothers' Fitchville Mills from the Town and City Atlas of the State of Connecticut by D.H. Hurd & Company, 1893

For the better part of a century the Bozrah mills utilized by the Palmer Brothers company served the Fitchville section of town and the surrounding community. Its adaptive reuse and eventual destruction provides a profound example of the plight of small manufacturing facilities in Connecticut and harkens back to a time when Bozrah was among the leading producers of quilts and bedding in the United States.

Elisha and Edward Palmer originally organized their business as a partnership back in 1867. In 1899, they officially incorporated their Palmer Brothers enterprise. Their goal was to produce quality, upscale bedding and accessories for consumers across the country. By 1928, the company was in a position to enjoy much of the success its founders originally envisioned. Palmer Brothers had a reputation as one of the finest quilt and comforter producers in the nation. Operating out of mills in New London, Palmerton, and the Fitchville section of Bozrah, Palmer Brothers found a high demand for their products through department stores and mail-order houses.

A Change in Fortunes for Quilt Maker

Like it did for many small companies around the country, however, the Great Depression brought great challenges to the viability of the Palmer Brothers brand. In March of 1935 the company closed its mill in New London and focused its manufacturing efforts in Bozrah. Two years later, a strike at the plant halted operations in Bozrah from April 27 until May 11, when the company brought workers back into the mill with a 10% pay increase.

Old company house in Fitchville, Connecticut. The Palmer Brothers mill in town is busy with orders for comforters for the Army – Office of War Information, Library of Congress, Prints and Photographs Division

Despite resuming operations and a contract to supply blankets to the army, the prosperity found in earlier decades never fully returned. In July of 1946, the company “temporarily” halted production due to an inventory surplus caused by waning demand for its products. During this period, Palmer Brothers employed between 100 and 300 workers at any given time (based on seasonal fluctuations in sales), and they all waited anxiously for an order to resume normal production that never came. In 1948 the company liquidated a southern subsidiary it acquired in Alabama just two years earlier, and in 1949, Palmer Brothers ceased operations altogether.

In 1950 the Berman Brothers Realty Company bought the Bozrah mill site in hopes of leasing out its electric turbines and boilers to another manufacturer, but no opportunities ever materialized. The mills sat empty for 3 years until a number of companies began leasing the property for storage space. Among these enterprises was the Warehouse Point Company (a subcontractor for the Alexander Smith Carpet Company), the American Thermos Company, the Robertson Paper Company, and the Allen and Reed plumbing supply company. All of these leasing arrangements, however, proved relatively short-lived.

By 1972, renovations to the mills allowed for the housing of large commercial chicken populations, but the buildings fell victim to 3 suspicious fires in less than a year—the third occurring the night before a delivery of 10,000 chickens was due to arrive. The fires gutted the buildings, forcing firemen to tear down what was left of the facilities (including a clock tower dating back to 1866). The demolition of the mill facilities brought an end to a century-old symbol of manufacturing prosperity in the Fitchville section of Bozrah.

Let There Be Light: An Early History of the Hartford Electric Light Company
Greenwich Emergency Responders: On the Move Overtime
The Colt Patent Fire-Arms Manufacturing Company
Charles Goodyear and the Vulcanization of Rubber
Hartford’s Great Migration through Charles S. Johnson’s Eyes
Branford’s History Is Set in Stone
An Orderly & Decent Government: The Rise of the Factory, 1866-1887
Edith Watson: Camera Artist
Stagecoach Sustained Commerce and Communication in 1800s
Brass City/Grass Roots: Farming as Recycling: The Becces in the North End