Located on Long Island Sound, the Fairfield County town of Stratford is bounded by the Housatonic River on its eastern border. Europeans settled the area known as Cupheag, or harbor, in 1639 and later named it Stratford. Its original lands included what eventually became Trumbull, Shelton, Monroe, and parts of Bridgeport. Early industries included oystering and shipbuilding. With the advent of the industrial age, manufacturing became an economic mainstay and Stratford today still produces an array of goods, from chemicals, electrical parts, and hardware to plastics and paper products. It is best known, however, as the birthplace of the American helicopter industry built on the pioneering work of Igor Sikorsky. 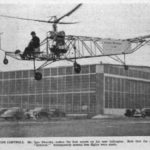