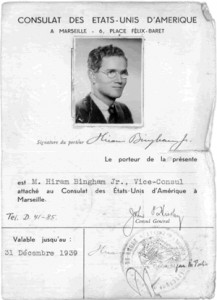 Career diplomat Hiram Bingham IV, whose family has lived in Salem, Connecticut, for generations, was born in 1903. His distinguished lineage included grandparents who served as missionaries in the Pacific, a father (Hiram Bingham III) who discovered the ancient Inca city of Machu Picchu, and a mother who was an heir to the Tiffany fortune. After graduating from Yale University in 1925, and then studying international law at Harvard University, Bingham entered the diplomatic service. As an American diplomat Bingham traveled the world. His early assignments took him to Japan, China, Poland, and England, but his most famous appointment came in 1940 as vice consul at Marseilles in France.

At the start of World War II, Marseilles, along with numerous other European port cities, received an influx of refugees (many of them Jewish), fleeing from the advancing German armies. When France fell to the Germans, the means of escaping Europe—and quite possibly a death sentence at a Nazi concentration camp—all but evaporated. During this time, the only way out of Marseilles was to obtain a visa. As vice consul, Hiram Bingham IV was in charge of issuing visas. In defiance of Breckenridge Long, head of the European Bureau of the US State Department, and contrary to official US policy, Bingham began smuggling refugees out of the country. As American consulates all over Vichy France began turning refugees away, they arrived in Marseilles in increasing numbers. While it is difficult to estimate the number of lives saved by Bingham’s actions, it is believed to be in the thousands. Bingham carried out his humanitarian efforts until finally being relieved of his post in the summer of 1941. After his work in Marseilles, transfers sent him to Lisbon and then Argentina. Bingham eventually retired from diplomatic service in 1945.

Surprisingly, Bingham’s work went largely unrecognized for decades. After his death in 1988, his son William stumbled upon some tightly wrapped documents behind the fireplace in his home in Salem, Connecticut. These documents included a journal and numerous papers detailing the magnitude of Bingham’s rescue efforts. Since these papers have come to light, Bingham has been honored by the United Nations, the State of Israel, the American Foreign Service Association, and has had a commemorative stamp issued of his likeness by the United States Postal Service.